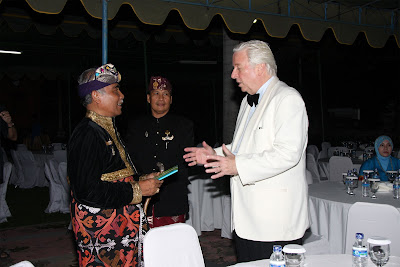 On the Royal Gala Dinner during the 1st SE Asia Royal Festival and Expo the representative of the European Union of Noble Families(Silano)could present a DVD to the host of the dinner and the president of one of the 3 representative organisations of Indonesian royalty;FSKN with information about Indonesia 1780-1942.
This raja;Ida Tjokorda Ngurah Jambe Pemecutan;was very glad with this DVD with info about the Government Almanak of the Dutch East-Indish,which contained from 1850 also the list of the principalities of Indonesia and their rulers.
The candidate-Raja of Buleleng; Anak Agung Ngurah Brawida; is looking on.
Until now the main activities of the Festival was after the Royal Dinner;26-11royal procession of SE Asia culture attended by for instance the 118 Indonesian monarchs/dynastychiefs;10 monarchs/dynastychiefs from the Philippines and dynasties from SE and East-Asia.27-11:opening by the Indonesian president of the main activities.Represented however by his minister of culture,because some international activities called him away.
28-11:special attention to the expositions.
The monarchs and the like are invited to be the guest of the Indonesian president on saturday.Also a delegation will go to Europe as guest of Silanao to exchange experiences of the functioning of royalty and nobility in the so-called modern world.
We thank Baron de Smeth for his trying to inform us as good as is possible about the events.We hope to be able to inform you more in due time.
Unfortunately until now not much information in the media and internet about the event.

I am sorry for not giving the complete information about the representative of the Dutch nobility.The representative of the Nederlandse Adelsvereniging/Dutch Nobility Association is Baron Drs. Ferdinand F. de Smeth van Alphen(58 years)
,who wrote some years ago a book about the functioning of the Dutch nobility in the so-called modern time.
So he is much experienced in this matter:the reorientating of the Indonesian royalty in this time in the society.