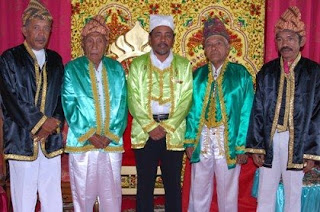 Again a sad message have reached us:the passing away of the Tomundo of Banggai after only ca. 1 1/2 year of rule in a hospital in Jakarta.
He passed away at local time 18.00 at the 27th of januari 2010 at the Mitra Keluarga Hospital the dynasty announced officially.
His younger brother Raja Irwan Zaman Awaluddin was directly proclaimed as the new Tomundo of Banggai.
Only at the 14th of august 2008 HH Tomundo Ir. Haji Iskandar Zaman Awaluddin,MM;born as the greatgrandson of the last raja of Banggai of their more direct line;Tomundo Haji Awaluddin(1924-1939);was installed as the new tomundo of the in N.E.-Sulawesi lying big area of Banggai.
In Banggai there is no direct father-to-son succesion, but they sometimes tend to follow that line;espacially in the present time.
When Raja Haji Awaluddin died in 1939 his oldest son Raja Muda Jaida was to young to become the new raja,so an influential member of one of the 3 branches of the dynasty was chosen to be the raja from then on:Raja Haji Aminuddin alias Raja Sukuran Amir (1939-1957). He was from the branch of the predecessor of Raja H. Awaluddin:Raja Abdulrahman(1904-1922). Descent via the female line.
Descent via a female line also is allowed in this dynasty.
Because the on 27-1-2010 died Tomundo Ir. Haji Iskandar Zaman Awaluddin was the son of the granddaughter of the in 1939 died Raja,or Tomundo Haji Awaluddin.
This line provides the most rajas of Banggai.
So with him the strongest branch of the dynasty came back to the throne.
The 49 years old raja was working as a teacher and on 1 july 2009 was even so popular,that he was chosen as member of the local parliament.
Banggai is an island group,but also the name of an island.
The area derives it name from the island, where the present dynasty comes from.
Between ca. 1365 and ca. 1478 there was some kind of stateformation here, in which time also the 1st real monarch in the area was installed.
The present statehood of Banggai;an united principality of Banggai, must have been made ca. 16-5-1600.
Already soon the big local power here;Ternate;could be the big brother also in this area,but the Banggai people are known for their strong feelings of a form of liberty, so tried to regain their first freedom all the time. That is why, that looking on the pedigree of the raja dynasty of Banggai you see so many rajas, who were deposed,because did not want to cooperate with the then then paramount power in the area;Ternate,or Holland.
After the death of Raja Nurdin (1870-1880);the 2nd most important branch of the dynasty never came back with a raja.
The present dynasty is said to be descendant from a sultan of Banten on Java. This sultan's son was armyleader of the sultan of Ternate (N.-Moluccans), who had conquered the area in 1580. After some kind of stateforming after a chaotic time his brother Raja Perinci Mandapaar became the 4th raja of his dynasty and could bring some unification in Banggai. Also some from of independence.
Banggai was however reconquered by Ternate in 1655.
Much later the total freedom for Banggai under Dutch rule was regained in the 20th century.
The last ruling raja,Raja Sukuran Amir;was followed as the face of the monarchy by his son Raja Muda Muhammad Chair Amir alias Raja Hideo Amir.
In 2008 however the traditional council of the dynasty decided to let install Tomundo Ir. Haji Iskandar Zaman as the 22th raja of Banggai.
So sad,that already after less than 1 1/2 year after his installation the life of this monarch of Banggai ended.
He was known for having so much ideals to give the people of Banggai an indentity within the Indonesian state:Unity in Diversity;the words under the Indonesian coat of arms; was a loved principle of him.

His remains were flied back to Banggai on the 28th of januari, where royal ceremonials would take place;attended by the dynasty,local government and traditional chiefs and many representatives of the Indonesian royal world;followed by his royal funeral.
This all would be led by the new raja of Banggai;his younger brother Raja Irwan Zaman Awaluddin.
We would like to give the dynasty and the people of Banggai hereby our sincere condolences;not in the last place the widow of the deceased Tomundo:
Her Highness Hajjah Ratu Zulvaina Djibran Zaman Awaluddin.
May the ratu and her close family espacially find the strenght of God to be able to take up the life again in due time.
After the prescribed 40 days of mourning the dynasty will decide over the date of the installation of the new raja.
Maybe he follow in the wise footsteps of his brother.
May the soul of the 22th Tomundo of Banggai:Raja Ir. Haji Iskandar Zaman Awaluddin rest in peace!

Thanks to HH Kanjeng Pangeran Haryo Gunarso G. Kusomodingrat;secretary of the Forum Silaturahmi Keraton se Nusantara;Jakarta;to inform us about the tragic death of the Tomundo of Banggai.

The Banggai area also consists of a peninsula,which lies ont r west of the islandgroup of Banggai.
I am sorry ti have forgotten that.

Sorry again.The deceased raja was married with Ratu Zaulfain Djibran.They had 4 children.
Later the raja raised in the field of the educational world.He also was a sort of advisor in the local government for education and also attached to some universities.He was as well chief of the council of kings/dynastychiefs of the province of SE-Sulawesi for FSKN.
The raja is burried the 29th of januari on the royal graveyard in Lompio.

raja Irwan Zaman is the OLDER brother of the deceased tomundo . . not his younger brother . .
sorry for telling that .. .
please ask the truth informan ..