Max Nico; son of Sultan Hamid II after 22 Years No Visit to Pontianak

Childhood Relived, Crying When Visit the Tomb of Father 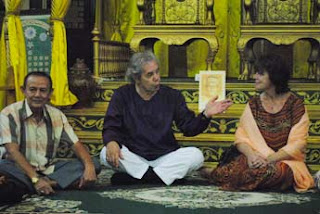 Hospitality: Max Prince Nico with his wife during a dialogue with the Sultan of Pontianak Sy. Abu Bakr Alkadrie Kadariah Palace, Pontianak, last night.
The atmosphere Kadariah Palace Pontianak, last night seemed so festive. Seen relatives gathered in the living room palace built by Sharif Abdurrachman Alkadrie in 1771 AD. Excitement that greeted the arrival of Sultan Hamid II's youngest son, Joseph, son of Sultan Sharif Hamid II, who was called Max Nico familiar. Although the Indonesian language is very minimal due to the length of stay in the land of windmills, but the conversations on the night it looked familiar. Some of the royal family are also many who speak fluent Dutch and English. Big in Holland, not forgetting to make Max Nico land of his fathers. Even according to the man who was born in Malang, January 11, 1942, the arrival to the city of Pontianak is awaited, after 22 years did not set foot in this equatorial city.

One by one, Max's relatives greeted Kadariah Palace and his wife. Not even a little of them crying, touched by seeing the arrival of Max. Meanwhile, Max and his own wife could not menyumbunyikan their compassion and happiness. "I've always longed to come to Pontianak. When set foot here, I already feel that this is my home, "said Max.Max tell you, coming to the city of Pontianak was already planned. By using a travel journey that ought to Jakarta, dimanfatkan Max and his wife visit to Pontianak. So that is time limited, the actually utilized to learn more about the history of the city of Pontianak. "Actually I wanted to stay very long. But because it follows the journey the travel, then only one week only. So Wednesday (14 / 4) before I had to go home, "he said.

He added again, many things at get it in Pontianak since his arrival last. Because up until now, he only knows the information about the City of Pontiac through his mother who is currently still in the Netherlands, and via the internet. Addition to meeting close relatives, previously on Friday (9 / 4) with the sovereign, he is also the time to visit his father's grave is located in Batu Layang funeral. The next day, he visited the tomb Juang foreman. "A lot of things that I got here. Like to see relatives, and visit the grave of my father, as well as to the Graveyard Juang foreman, makes me feel touched. So much so that my tears, especially when visiting the tomb of his father, "said Max, who is currently working in Holland as a psychologist.

According to the Sultan of Pontianak, Alkadrie Sharif Abu Bakar, who is a cousin of Max Nico, the son of Sultan Hamid's arrival was welcomed by courtiers. Since Max is the closest relative of the kingdom, where he was a son of the king's palace Kadariah Pontiac, and had not visited the city of Pontianak. "He was the last to the city of Pontianak on the death of Sultan Hamid in 1978. But then, he had only one week in Pontiac, and immediately returned to the Netherlands, "said Sy. Abu Bakr Alkadrie.

Nevertheless, the Sultan said, she could feel her childhood with Max. At the time of Sultan Hamid II, Sultan's Palace is still as Kadariah. "I remember watching him circumcised here, and is celebrated in this palace," said Sultan.Oleh therefore, take advantage of the moment of arrival of Max Nico, Sultan Palace Kadariah relatives gather, to bersilaturami , because the Sultan sure all the relatives really wanted to meet with Max. "The proof of all the relatives are gathered here. Blend into one. Telling about an old story to make us feel happy. Hopefully his arrival can again be repeated in future, "said Sultan.

All Document and Picture are translate and taken from Pontianak Post Newspaper
(http://www.pontianakpost.com/index.php?mib=berita.detail&id=32732)

Actually he was here 32 years ago,when his father Sultan Syarif Hamid II Alkadrie was burried.Before he was not lomng in Pontianak.He is now in Indonesia also to clean the name of his father,who was said to not work enough for the real independence of Indomedoa.which is not true.
Also to give his father credit,that he is erally the only designer of the Indonesian coat of arms/lambang.

I second Anonims statement about Who created the Indonesian Coat of Arms; it was really the late Sultan Hamid II who created it,but this fact has been dissillusioned by the Orde baru regime, and now relatives and family of the Sultan Pontianak are trying to clear this up, to seek recognition from the current government.
I really hope this task will find positive recognition.
regards,
Tjandramidi(a concerned family member)

hi,,i come from Pontianak City,,
i just found out that name of Sultan Hamid II's son,all this time i just knew about Sultan have 2 son's who live in Netherlands..but i don't know about their name,,,thank for the information and i hope that the name of our Sultan can be cleaned by his son..

Is Max a muslim?