Also in Middle Timor the rajas come back 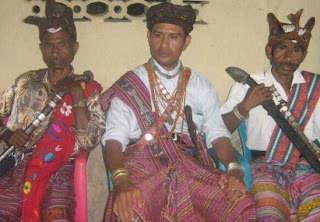 Middle: H.H Raja Vicentius R. Manek of Naitimu*
Timor is known as an island where the traditional social systems are one of the best preserved of Indonesia.
The middle part of Timor is known as the most traditional of the total island and of this area the north part of this area;known as the Belu area;is the more traditional than the s part of Belu.
One of the principalities there is the principality of Naitimu.Now lying in the sub-district, or kecamatan of Nanaet Dubesi.
In 2000;when the chances changed for the Indonesian dynasties to really come back in the social system,also in Belu plans were made for the official selection and installation of the several rajas of the area.
Belu is known as the area,where the Maromak Oan,or Emperor of Belu and theoretically of total Timor is living.He lives in S-Belu.
Because of some political facts then this selection of the rajas of Belu was more or less delayed for several years.
In the north part they know for instance the dasi ran principle.A raja must be a full blooded royal,or as much as possible.
That was still the case,when in 1878 Raja Taek Mauk of Naitimu in north Belu died and the full-blooded royal line could not be continued anymore. In the south of it lying Fialarang federation there were still full blooded,or dasi ran persons,so a request was made to Loro Atok Lulin of Fialarang to be able to adopt his son Prince Fahi Mauk as their new raja. That was accepted. Already the dynastic marriage contacts had existed before here.
When this raja died in 1890 he did not had children from his royal wife,so again a dasi ran prince had to be requested from a dynasty. Then a son of the Raja of Lidak and the Ratu of Jenilu (both nearby Naitimu) was allowed to be adopted as the new raja. This Raja Don Basenti da Costa ruled until his death in 1914.
Because he was in 1890 only 7 years old and his family wanted,that he had to finish f.i. his school first,a son of Raja Fahi Mauk from a not full-blooded royal wife,but nobility wife,
was installed as one of the regent-rajas of Naitimu with name Fettor (ruler's title) Yoseph Atok.
He ruled without complaints from anyone until 1894, when the new raja was installed.
This raja also had no children from his dasi ran wife, so again there would be a difficult situation.
But in 1914 Holland already had decided to take care more of the political situation on Timor for ca. 9 years and with them the contacts the missionaries could make with the local royalty and people had augmented.
The mission especial explained to them,that God for real respected their social system, in which many good things were, but that he had nothing against a raja,who was not a full-blooded royal.At that time it was already very difficult to find full-blooded royals here and of course it would be explained then, that God would accept a less full-blooded, or dasi ran royal, if no other royal would be available. Better a less dasi ran raja,than no raja at all, which would lead to chaos.
So then the son of the former good functioning Regent-Raja Yoseph Atok was accepted by all as the new raja:Raja, or Nai Frans Manek.
This raja was known as a very wise man.In the 2nd World War many rajas of Timor suddenly went to the Japanese side.For a part because of fear.
But Raja Frans Manek already had experienced the good things also Holland had brought to his area and decided to fight with his people as one of the 2 rajas in the Belu area for the Dutch cause in 1942.For that he became a very well-known raja.
He died in 1953 and was succeeded by Raja Balthasar Th. Siri.
But already at that time the younger brother of Raja Frans Manek;Prince Vicentius Mauk Atok;worked hard to stimulate his people to try to make their lives still better.
Even today the young people still talk about this prince,who dedicated his life for the well-being of Naitimu.
Raja Balthasar Th. Siri died 4 july 2001;being 88 years old.

After a selection time the royalty,nobility;with the consent of the people of Naitimu; decided to ask the grandson of the very popular Prince Vicentius Mauk Atok to be their new raja. This Prince Vicentius Rodriques Manek (born in 1969) already was then known as a prince with the same dedication and love for his people as his grandfather.
During a 3 days series of ceremonies and festivities;from the 5th until the 7th of june 2007; Raja Vicentius Rodriques Manek was installed as the new Raja,or Ama Nai Nanaet Dubesi by Raja Hendrik Tefa of nearby brother area of Mandeu.
The new Ratu of Naitumu is Ratu Florentina Christianti Manek;SH and the new crownprincess their oldest daughter Ratu Muda Elisabeth Oktaviani Manek.
No negetative emotions were shown at these solemn ceremonies.
They very much like,that the raja always socializes with his people.
This raja also comes from a long line of very important rajas from the principality of Fialarang.The first ruler of his dynastic clan:his greatgrandfather Raja Fahi Mauk(ruled 1878-1890)was the dasi ran son of the 11th loro of Fialarang:Loro Don Anthony Atok Lulin
(already known as crownprince of Fialarang in 1818).
The raja is proud about his history and culture and shares it with everyone.
Besides his duty as raja of Naitimu,he works in the network marketing business locally.

That the good God will bless him,so that he can be a real father for his people and a good father stimulates his children to make the very best of their live.

*Picture from The Collection of H.H Raja Vicentius R. Manek of Naitimu instead of Ruddy Manek