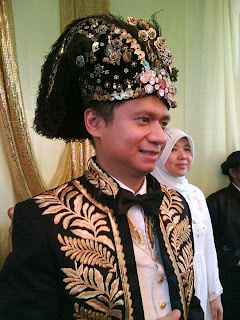 On the 19th of november 2010 a man of Indonesian origin was coronated as the 21th Sultan of Bacan;an Indonesian island group in the North-Moluccans. Sultan Dede Muhammad Gary Ridwan Sjah.
His father Sultan Alhaji Dede Muhammad Gahral Adian Sjah was sultan of bacan from 1983 until he died 21-9-2009. He was also the districtchief (Bupati) of Central-Halmaherah.
The son of this sultan already went at a young age to the USA and could make there a quite succesfull career as an computer specialist;now living in the state of Ohio.
Because his father the deceased sultan was quite loved by his people, they asked him to become their new king.
In the beginning he thought, that would be quite a problem to combine his high job in tne USA with his dignity as king of Bacan.
The sultanate of Bacan is not an automatic from father to son monarchy, but an elective monarchy,where the 4 royal clans elect from within the dynasty a good candidate for the throne.
The new sultan however already was known as a quite loving and caring prince for the Bacan people,so the local nobility insisted, that he would become their new king.
The new sultan is also known for his quite humbkle acting, so immediately he is now loved by his people.
After Sultan Dede Muhammad Gary Sjah was coronated with the centuries old crown and given the very old royal digity stick with golden knob in his hand (Tongkat Sultan)he was declared as the 21th sultan of Bacan.
Before Sultan Zainal Abidin Sjah was made before 1512 the 1st sultan of bacan, there were already non-muslim kings in Bacan,which once was seen as the most important kingdom in the North-Molccans and even in the total Moluccans,with even influence in the the Papua areas.
After the coronation the sultan,who is married with the also of course attending Sultana Boki Winy Sjah;returned to the USA. In the mean time the royal court organised the big festivites and royal reception for a later date,which would be attended by many king and rajas of Indonesia.
That the Almighty and Loving God will help this good sultan of Bacan to lead his people.

N.B. :The picture was given by Mr. Wanda Poejangga;member of the royal court of Bacan.

The sultana is born as Raden Ayu Winarni Savitri Wiramihardja;granddaughter of Regent Kalih Wiramihardja of Garut(Preanger area/West-Java)and therefore descendant of the regents of Sumedang,who are in fact the kings of Sumedang Larang;in the same area.