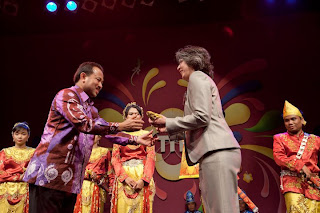 On the 25th of may 2011 Holland witnessed a very rare and interesting event:an

It is known,that the Banjarmasin performances in this field are nowadays every genuine and not adapted to the so-called modern taste.

This real culture went directly into the heart of the European audience,because the audience showed a very enthousiatic reaction to it.
Sultan Khairul Saleh of Banjarmasin;also the bupati of Banjar,is already for more than 10 years very busy is trying to revive the Banjarmasin culture in general and the royal culture in special.In that he is very succesfull.He is now also busy in trying to resurrect the last having existed sultan's palace of Banjarmasin.

His total project to promote Indonesian culture in Europe was reasonable effective;also because European people are espacially interested in the old culture and history of Indonesia.

The emeralds,diamonds,original still existing culture,history and culinary traditions were the aspects of Banjarmasin in this promotion project.

Banjarmasin has the potention to become a sort of 2nd Yogjakarta of tourism.

The sultan tried in Holland also to contact the diamondmuseum in Amsterdam(Amsterdam is one of the major diamond business towns in the world and Banjarmasin is the most important diamond and the like areas of Indonesia), the national Holland organisation of nobility (to exchange experiences between Indonesian royalty and European nobility) and cultural institutes.

Besides the sultan and his cultural and royal delegation of 60 people(including his sultana,crownprince,daughter and younger brother),also Pangeran Paku Alam IX of Pakualaman in the Yogjakarta area sended a royal cultural delegation to the Tong Tong Fair.

They also left behind a big impression,which will last because during the whole TTF they will give until 5 june several performances;like the royal Banjarmasin dance- and music group.

It is good to know,that people like Sultan Khairul Saleh of Banjarmasin has now discovered,that half of the potensi of the Indonesian areas for tourism lies in presenting true and original (royal)culture to f.i. the European visitors and in their own areas trying to be strong to stimulate the performance of it.

In the so-called global modern world the people are more and more seeking for local real traditional culture,which contains more the heart and the love of the people.

We shall keep on following the good ideas and projects of Indonesian kings like Sultan Khairul Saleh of Banjarmasin;the bupati of Banjar,who only tries to use the by God given talents to show the pleasure for live in his own general and royal culture.

i am browsing this website dailly and get nice facts from here all the time.