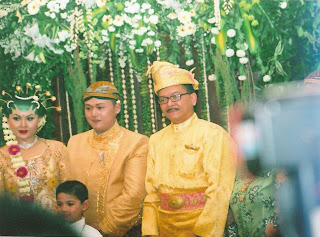 The man in the yellow cloth is Sultan Kamal Abraham Abdul Jalil Rahmat Syah; 12 Monarch of Asahan in East-Sumatra. He is descended from a Sultan of Aceh and a noblewoman from the Batakarea. This friendly king is a good medical doctor to, who stay ed long in Aceh. His father was Sultan Saibun Abdul Jalil Rahmat Syah; an athletic king, who was the only one, who could escape from the non-proteced area in East-Sumatra in 1946, when there arose the so-called social revolution, in which outsiders could make it happen, that most of the 27 East-Sumatra monarchs were(mostly)killed, or taken prisoner.Sultan Saibun swimmed in a borderriver to safety. In Aceh happened the same thing.
In World War II the Japanese already had killed nearly all of the monarchs of West-Kalimantan and of the Sangir- and Talaud islands, because they were seen as to much pro-Dutch (paranoia).