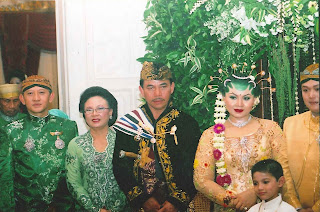 Centre (with moustache): a Raja from East-Lombok. In 1740 the Raja of the Balinese Hindu principality of karangasem could conquer West-Lombok. East came under the influence of the Sultan of Gowa(north of Lombok). In 1849 total Lombok was united under the rule of the Raja of Karangasem. But in 1894 the resistence became to big for him and because of the help of the Dutch the Raja of Lombok(as he was known then and not of Karangasem, because the Lombok branch was now ruling over Lombok and Karangasem) lost in battle against the Dutch.
The East-Lombok rajas who were in f.i. the Bali time districtchiefs only and in the Dutch time also, always kept their semi-indepence more or less in the eyes of their people. That is why,that they are coming back now as dynastychiefs at least. The united Lombok monarchy ceased to exist in 1894. 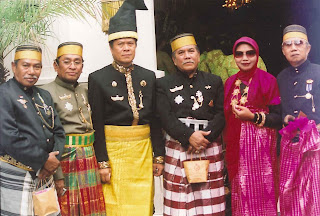 Picture 2nd from l the on 25-7-2008 installed 38th raja, or Karaeng of Sanrabone : Karaeng Andi Ali Malongbasang.
Sanrabone is a little principality in the Makassar area in the extreme SW of Sulawesi. Actually it was under the sway of Gowa(=Makassar) and ruled by a prince from Bone, but in 1667 seperated from it. Gowa and Sanrabone royalty married much with each other. In 1865 the principality became a direct ruled area. But the dynasty kept on delivering the regent for the area.

The man with the high cap is Raja Andi Rustam Paga of Bastem; a vasal-principality in Luwu (middle Sulawesi) and Representative of the Monarch (Datu) of Luwu.

CLICK ON THE PICTURE AND IT WILL BE ENLARGED.

HAVE PLEASURE AND INTEREST TIME WITH THE SITE.

The royal from Lombok(being described by some as the dynastychief/representative of the dynasty of Sile Dendeng(...???)
also attends royal meetings in Indonesia as representative of the Dewan Majelis Adat Lombok(the traditional council organisation of Lombok/Sasak people).
He comes from Ketare town,which is an little town in S-Lombok;before lying in the quite important principality of Pejanggik,which is in middle- and S-Lombok.

Asociasi is the right spelling of the first word in AKKI name;royal organisation in Indonesia.

I am sorry.I made a mistake again.The 1st wird must be asosiasi.