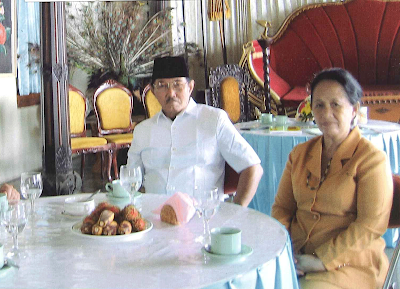 Pangeran Sudewa Alibassa of Gebang with his Ratu in his palace.
Gebang was a vasalprincipality of Cirebon principalities, which are all in W-Java. Gebang is East of Cirebon. Gebang is known for his special cultural way of practising islam religion. The dynasty has a more than important role in it.
The first Pangeran of Gebang was Pangeran Wira Sutajaya, who was appointed by the famous founder king Sunan Gunung Jati of Cirebon (who ruled ca. 1527-1580).
Gebang is a place of the really old Culture of Java.
Donald Tick,
Pusat Dokumentasi Kerajaan-kerajaan Indonesia "Pusaka"
Edit by festivi
Diposting oleh langkat di 10.20