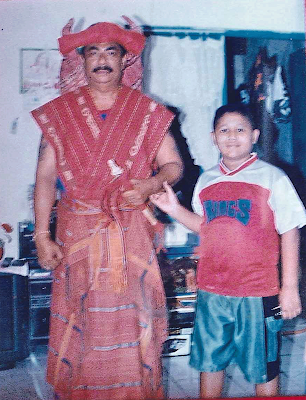 Although the island of Kisar in the SW Moluccans isn't always considered as a principality, you can consider it as such.
He is the 13th raja since the 17th century.
Bakker comes from the name of a Dutch colonial official. His ancestor Raja Cornelis Bakker took that name, because hoped with that name also to become as influental as the Dutch people.
On the island here was a Dutch contigent of soldiers. These Dutchmen ere left behind and forgotten and married with local woman. So a little new people of mixed Dutch-Kisar blood was made. These families later intermarried with the raja dynasty. So the present Raja of Kisar has Dutch blood in his veins to.
On the picture he is depicted with Crownprince Philipus Hairmera Bakker; the son of his younger brother Prince zacharias, because he only has a daughter.
The history of the princpality is sonce old time written down in an impressive book, who is after the Bible the most important book on then island.
The different peoples on the island have some kind of autonomy under their own traditional leaders. The palace of the raja is in the town of Wonreli.