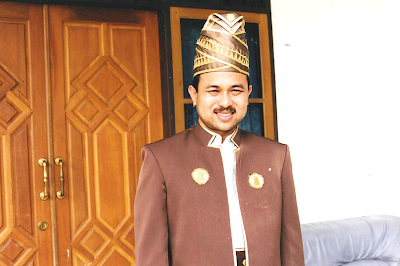 He is the big man about revival of Banjarmasin culture including royal culture as well. The Banjarmasin people are know for their sweet character. So he is. He is direct descendant of Brother of last recognized Sultan of Banjarmasin: sultan Adam Alwartzikubillah; a Sultanate, which before was as powerfull as Brunei. In 2005 he was first (candidate) Monarch of Indonesia, who also was chosen in modern time as ruler on old principality, or kingdom.
He is since 2005 Bupati of Banjar; the central part of the Banjarmasin Sultanate.
Maybe he is one of the most dedicated monarch/local ruler to bring back some royal elements in the life of a former kingdom.
He is aquite a religious man in a pleasant way.
Also to revive the good feeling in life with harmony and love for all is one of his ideals.
Let we hope, that this SE Kalimantan area; the area of the diamonds, will flourish under his rule.

Gusti Khairul Saleh or GKS be a Young King or Sultan is not for feodalistik minded but he want a tradition of Banjar kingdom can live forever. The globalitation can make the traditional culture especially Banjar Kingdom will dissapear from this country even in the world. What we have now is just a dignity and pride about existence of a kingdom which can survive and fight against the occupation. Do not get just because of the struggle for power and degree, cultural of traditions and royal train just dissapear. We must show to the world despite the Sultan of Banjar was interrupted but unity and integrity of Banjar royal stay awake and alive forever.