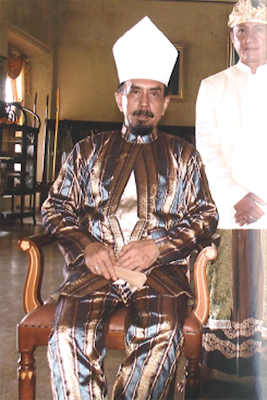 When you want to make it complete you should put Masjur Kamo Lano behind his name. Before his predessors had even more elaborate titles.
When his father Sultan Iskandar Muhammad Djabir Syah (the last ruling sultan) died in 1975 his crownprince Mudafar became quite political active for his area and remained as such through out his life until now. In 1987 he installed himself as Sultan of Ternate, but in that time that wasn't recognized officially.
He is married now with his 4th wife, which is a princess of Surakarta.
In 2000 he was in the middle of a poltical crisis in the N-Moluccans, but now he is in more peacefull political waters. He laso was before chief of the main Indonesian political party in the N-Moluccans(Golkar)and chief of the local parliament,but now he shifted his activities more to the direct welfare of his people,business and his tasks as chief of the Forum Komunikasi dan Informasi Keraton se Nusantara;the 2nd biggest representative organisation of the Indonesian dynasties.
His crown is quite a religious symbol (in other parts of Indonesia the crown is just more a decorative symbol taken from the western culture). It is said, that it contains hair of the first muslim Sultan of Ternate, who ruled 5 centuries ago.To discuss about this item is now not important,more important, that Ternate before in history was only the 3rd dynasty of 4 of the Moluccans,but because of clever politics it became the first powerfull of the Moluccans. The raja dynasty of Loloda in West-Halmaheira says, that is is descended from a Ternate sultan and the Sultan's dynasty of Jailo was since several centuries under the political umbrella of Ternate. It's powerbase in the N-Moluccans is more to the west. Before the total Moluccans and the westpart of West-Paua was under the influence of the 4 N-Moluccan sultans.
Even in the Christian part of Indonesia the Sultan has family links, because his daughter Princess Mira Syah is maried with the Raja of Amarasi on Timor: Raja Robert Koroh.
The main issue now is to setle, is that not each of the 4 sultanate area's tries to make his area the most important, but to work together in true harmomny and that is everywhere in the world the most difficult thing.
In the N-Moluccans they have the Moloku Kie Raha system:the system of the 4 Kings of the mountains (the volcano's seen as mountains).
In Ternate they don't have a real father to son succesionsystem. A candidate is selected by the traditional system chiefs and the Sultan. That has not been done yet. Maybe the oldest som Prince Ismunandar Aim Syah will be the crownprince later.
The Sultan is known as a quite educated man and also still speaks even Dutch.
At least all educated Indonesian people are proud, that they are still friends with their former colonisers, from which they became free from 1945-1949. In Indonesia it is like: when the problemaffair is over there is no need to obstruct, that you can become friend again with your so-called former enemy.

quoted by author that the next crown prince will supposed to be named by the sultan and traditional system then the one who potentially be a crown prince is the oldest son of Ismunandar Aim Sjah's oldest son definitely a mistake. I'm the son of Mudaffarsjah (the current Sultan) need to clarify that in Kesultanan Ternate we never have term "crown Prince", no body knows who will be the next sultan. And even, we never discussed about this matter because we dont have any intention to interfere "hukum adat" or our custom law. These notification only for being clarification purposes, better if the author attempt to inquire about this information to the Sultan "Jou Mudaffarsjah".

You have to know that until now in the Sultanate of Ternate, There is no specify who became a Crown Prince (The next king of Ternate), which will replace the Sultan Haji Mudaffar Sjah II, because in the Sultanate of Ternate to set a crown prince must be done according to local customs (through a special selection process). The Candidates is came from the sons of the Sultan, but does not close the possibility comes from the child of the cousin of present Sultan. The Candidates is submitted by the Klan and Sangadji and Soasio but if rejected by the Heku and the CIM, the candidates must be replaced (reject). Until now, I dont know or hear, who will be candidates for the next Sultan of Ternate. In this time, there has been no discussion about or discuss the succession issue in the environment of the Sultanate.

That is my description here ....

Again, The 4th wife is not a princess of wherever kingdom. she is definitely met by chance in jakarta with Jou. She has 3 children with her 1st husband. But, it's oke as matter of fact i'm not really concern in her bussineses. But, I deeply say thankful for Busranto's explaination, it's completely true. I believe he could be one of your resource to inquire about Sultanate of Ternate further. But, i convey my highest thankful for your awesome creature in presenting our sultanate anyway. Hopefully, we can collaborate more and more in the future. Good Job Sir.

Maulana, CIC of Sultanate of Ternate

Thank you for your explanation,which I also received in my mauilbox.I do not know,how to know,when someone reacts to my stories.Maybe you can tell me.
I combined the traditional rules with te modern practises.So:nowadays more and more the oldest of the former sultan is the sultan.Like in Negri Sembilan you also of persons,who elect the new king,but that is nowadays more a respectfull ritual.
Sultan Ternate gave to the Royal Ark website,to which I contributed,the name of Prince Ismunandar Aim Sy as his oldest son.That is why I thought he was the crownprince.
The present 4th wife of Sultan ternate is according to some people a member of one of the middle Javanese dynasties.
Thank you for all.

Also nice to read things in my e-mail.

I think Koen van Gelder is going to be the next Sultan. His father is wannabe Sultan and Mudzafar is Koen's grandfather's brother. Choose him choose him. &ajewn2ijf
Groetjes,
Geert

You did really a great job. I found your blog very interesting and very informative. I think your blog is great information source & I like your way of writing and explaining the topics. Keep it up. I'm going to follow your blog.

Wow! This can be one particular of the most beneficial blogs we have ever arrived across on this subject. Actually Magnificent. I am also a specialist in this topic so I can understand your hard work.

My Great Great Grandfather or my ancestor came from tarnati or ternate. My ancestor was a bugis or too from ternate then came to philippines a century ago. My father is still looking for them. we are now at the fifth generation of the family. please help as find them. i know that they're also looking for as.