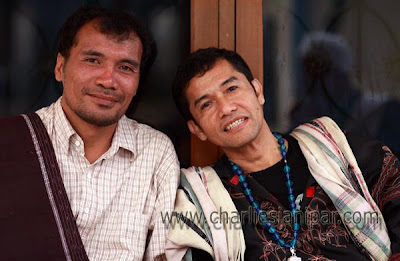 Left:
This Raja Ir. Tonggo Tua Sinambela is living in Medan, but actually is the Raja of an area called Bakkara; near the Lake Toba.
He is the 15th raja of a dynasty, who emerged in middle Sumatra in the middle of the 16th century as a sort of chiefs of the Batak religious culture;of all the Batak peoples.Sometimes they were called the "pope" of the Batak world.
The last ruling Sisingamangaraja was Raja Sisingamangaraja XII (Raja Ompu Pulo Patuan Bosar Sinambela), who ruled 1870-1907 as Raja of Bakkara,but because absolutely not showing any feelings of trying to understand, that the Dutch east-Indish Government also had several good intentions in his area, he was made to flee to Pea Radja in the Dairi area from 1889.
On the 17th of june 1907 he was killed near Pulubatu because of a language misunderstanding.Raja Sisingamangaraja XII then wanted to surrender to a trfoup of Dutch East-Indish soldiers and said in his language, that he erally had the intention to do so and wanted to give his long dagger to the soldiers, but one of then taught, that he wanted to take his weapon to kill them.
Before the leading officer Captain Christoffel could prevent that,t he bad thing already had happened and the Raja was death.
In a honourfull way the body of the raja was then brought to another place.
Later his family became interested in the Christian belief and remained as such.
Traditional Batak people asked the Dutch East-Indish Government later to let install his 3rd son Raja Karel Bontal as Raja Sisingamangaradja XIII,which wasn't approved. Traditional Batak people saw him however as Raja Sisingamangaraja XIII.
Raja Ir. Tonggo Tua Sinambela is een by traditional Batak people as Raja Sisingamangaraja XV. Espacially since the official rememberering of the 100 years of the death of his greatgrandfather Raja Sisingamangaraja an Indonesian National Hero, he more comes into the open.
He must be a kind and humble nobleman,who really likes to explain,that the "Boss of the world" is in Heaven and that he as a wordly raja and a bit religious traditional symbol, is only his representative.

Well... round about every blog posts online don't have much originality as I found on yours.. Just keep updating much useful information so that reader like me would come back over and over again.
………………………….
Forex Robots

This article is great.