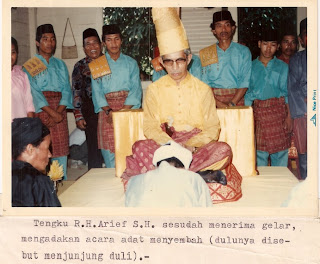 The present Sutan's dynasty of Indragiri was founded in the 15th century.
It was made by a nobleman from the Minangkabauw empire in W-Sumatra, who was dissatisfied with a situation.
For a time it was under the sway of the Riau-Lingga Sultanate: it's neaighbour.
Indragiri was also functioning as a sort of judge/controlpower for ore little nearby principalities.
It is one of the biggest principalities of Indonesia.
It is known for not having a very vilent history.
From 1876-the 1890-ies there were many thronestruggle events. In 1902 the minor-Sutan Mahmud Syah came to the throne;effective rule in 1912. He ruled as one of the last kings of Indonesia , who had to give up his throne for civil rule (after his death in 1963).
He was also one of the best rulers Indragiri ever had. The local people and the Dutch East-Indish government were full of compliemnets for this dedicated and serious ruler.
After his death his son Tengku Muhammad became the unofficial chief of the Sutan's dynasty. He died in 1984.His younger brother Tengku Arief was installed in 1988 as the 27th raja of Indragiri and also one of the first rajas, who thought, that it was time to be a dynastychief as indentity focuspoint for the people.
In 2008 the in 1961 destroyed palace was rebuild by the districtchief (who also was a member of the dynasty).
The present dynastychief, his family and his own children are known for there very good education.
They try to keep the history and the local culture alive, but also learn form the foreign countries. Not only in words, but also in acts.
An exemplary dynasty to.
Text By :
Donald Tick,
Pusat Dokumentasi Kerajaan-kerajaan Indonesia "Pusaka"
Edit by festivi
Diposting oleh langkat di 11.31

I am sorry.We just got the message,that Sutan Haji Arief was installed 1-2-1986 and his oldest brother died in 1978.Thank you for your attention.

According to local source the principality is founded ca. 1298 A.D.But the this dynasty was not ruling.A few principalites were then in the Indragiri area.

Thank you for reaction and interest.I want to stay on writing in English,but use always not to difficult words,to be able to let read the interesting culture and history also by people from outide Indonesia.
To discuss with me about the kerajaan2 Indonesia you also can write to me directly at pusaka.tick@tiscali.nl .
Thank you.

If Indonesian people tell me,what they kmnow about their own local kings/dynastychiefs,hen we can share this knowledge with the world.No other such initiative is made.I want to know the good things of Indonesia kings be known by the world.So that the people of Indonesia and the world stay interested in it and so that Indonesia will really remain:bhinekka tunggal ika/unity in diversity.
I am very much in favour of unity(God made Indonesia like that),but also diversity in a good way.Every part of a people has their own expression in their culture of life.

Thank you for the article regarding Indragiri (my family).
Hope we will meet in the next future.

Thank you for your visuit and your comment on our site.I hope you will have time to react to my e-mail an the like.

To hear from Tengku Parameswara,that Sutan Haji Arif was laready installed as monarch of Indragiri was a big surpsie for me.
A pity,that they can not come to Holland.

Im am sorry for to hasty react to your message.

i found this article while searching in internet by coincidence.
I'm so interested in indragiri history also.. 'coz my family inherit this name and we don't know nothing about it.. actually, we'r arab from makkah with indonesian root(indragiri)..
your help is so much appreciated..
this my e-mail:
wana_fly_high@hotmail.com