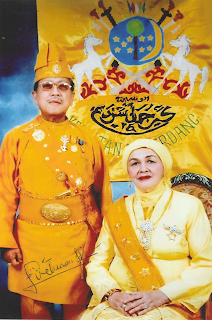 Here is depicted a rather special person:as historian he is known as Tuanku Luckman Sinar as King (of Serdang/East Sumatra since 2002) he is known as Sultan Bashar Shah II.
Also quite special is, that the livespan from his grandfather Sultan Basyaruddin Shah until the present time is exactly 200 years. His grandfather was born 1809 and ruled until his death in 1879. As a middleaged man he begot his succesor Sultan Sulaiman Ariful Shah, who ruled until 1946. This sultan begot the present Sultan as already a relative old man in the beginning of the 1930-ies. This Dutch speaking King is very good informed about the history of espacial the island of Sumatra; Only the southern part is not his area. His dynasty is also intermarried with several nearby dynasties, so that he is espcial informed about the East-Sumatra dynasties. He had written very much book and articles, gave very much readings, know very much about the function of the dynasties in the present time, advises many dynastychiefs about how to reappear in the social life of their area and is very respected in the national royal network.
Now he is working on a project to make his father Sultan Sulaiman a National Indonesian hero, because of his always thinking and acting for an independent Indonesia (he was much preserving his independent identity and the Dutch found him a king with heart for his people, but not very good cooperating with Holland).
He is a very examplary Indonesian royal, how he uses his descent to serve his country well.
On the picture he is depicted with his wife Sultana Suri Daratul Qamar; a princess from the nearby (former) principality of Kotapinang. Also a royal, who is very good informed about the local royal/princely history and shares the interest for the local history with her king-husband.

Thank you you read all the info.