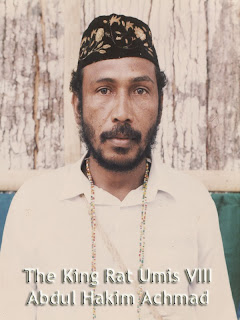 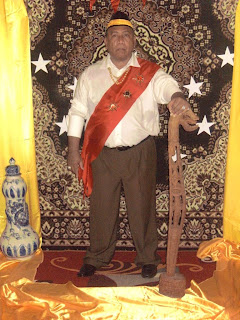 Kaimana is one of the 9 principality like areas of the Bomberai peninsula area of Papua.
Originally Kaimana was a part of Namatota (Namatotte) principality, but slowly but surely became effectively an area on it's own.
Kaimana must have been already ca. 5 centuries an area on it's own.Some centuries ago it merged with Namatota. Namatota is the Papua principality lying in the east of the above called area.
Namatota had more minor rajas under it's rule.
When Kaimana was still an independent area, it was ruled from Adi island, but later they went to Kaimana area proper and called itself Kaimana Lamora.
Ca. at the end of the 19th century the last Raja of Adi (succesor to the raja of Kaimana Lamora) had died,but in the extensive area of the Namatota principality there was a need for representatives sometimes.Now the need was felt in the area, which is later called as Kaimana.
Ca. 1898 a sub-raja was installed with name NaroE. The dynasty now claims, that he was actually descendant of the rulers,who always had ruled Kaimana.
Such a ruler was actually called Raja Komisi,but locally they called him Rat Umis.
The last Rat Umis in Dutch colonial time was Rat Umis Achmad Muhammad Aituarauw.
First he lived in kaimana town, but to go a bit away from the pressing influence of his suzerain he made a new residence on the Kilimala island somewhere in the 1930-ies.
This ruler was known as a quite cunning man, with so much influence in Namatota,that the Dutch were seriously thinking of replacing him by another ruler to try to reestablish the power equilibre here after World War II. That was never done however.
The Rajas of Namatota and the Rats Umis of Kaimana were also quite influential in the Arguni bay area in the north of the area,but later that remained more or less a nominal influence only.
Most of all these rulers in the Bomberai/Onin area were trader dynasties, who had more interest in trade,than real rule as it was known in the west.
So the Dutch were not always fully satisfied with the intermediary function they had between the Dutch Government and the more inland living peoples.
When the last Rat Umis of the Dutch time died in 1966, his son Muhammad Achmad Aituarauw was then already a respected government official. He was made officially the Rat Umis then, but gave the day to day monarchistic rule, or functioning to his brother Muhammad Saleh Aituarauw, who was only recognized as Regent-Rat Umis.
The present monarch of Kaimana; Rat Umis Abdul Hakim Achmad Aituarauw, S.Sos; a well-know politician;is the son of Rat Umis Muhammad Achmad Aituarauw.
This ruling family was always full of ruling ambitions. So is a certain Drs. Achmad Hassan Aituarauw the present Bupati, or Districtchief of an area, which also bears the name Kaimana and the cousin of the Rat Umis(son of the former Regent) Haji Arobi Achmad Aituarauw was in 2006 a candidate for the governorship of the province of Papua. (He became 2nd).
Nowadays the Onin, or Bomberai area rajas are espacially very important in being the representatives of their area concerning the rights the local people have in protecting the ecological system of their areas.
The radjas of Namatota and the rats umis of Kaimana were not always so at the top of their power, but the people always respected them as the at least symbolic representatives of their areas to the outside world.
Or:focussing on your own local identity.
The Onin rajas were before represented to the outside world by the Raja of Rumbati and these had to make political dealings with the Raja of Misool in the Raja Ampat islands(west of Onin area),who was the representative of both areas for the N.-Moluccan sultan of Tidore,who was the suzerain of this area.
Some said before, that the power of the 9 monarchs of the Onin-area was nearly gone, but nowadays they are returning back strongly: for instance as fatherly representatives of their respective areas and keepers of the local customs and history.
This is another example,that political functioning of rulers can hardly be predicted for the full 100%.

With thanks to the Aituarauw ruling family for using the picture of the present Rat Umis, to be found as well on their own website at
http://aituarauw-kaimana.blogspot.com

The Rat Umis is now a quite active member of the provincial parliament of Papua,in which he is quite famous in the media,where they describe how he tries to represent the needs and wishes of the people of the area,which he represents with wisdom and dedication.

I am sorry;the Rat Umis is member now of the parliament of the new province of Papua Barat(West-Papua).

Indonesia have many kingdoms, i never heard alot

Thank you for your interest.Yes,that is our aim to bring the interest and knowledge back about the ca. 300 dynasties of Indonesia.Keep on visiting our site.

The present raja of Kaimana was installed in 1980.The old raja is in 2009 still alive.He is 87 now.
The official title of a raja here is:
Djouw Nati Rat Sran Amana Umisie.