The political resurrection of the King of Ternate 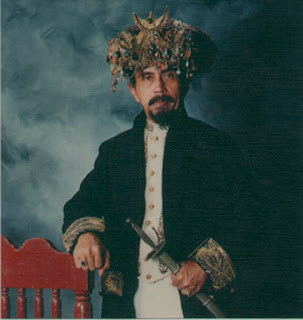 Indonesian politics is still unpredictable and that it makes it also quite interesting.
One of the big surprises of the last time is the sudden political resurrection of the Sultan of Ternate in the N-Moluccans.
This king with complete name:Sultan Drs. Mudafar II Syah Masjur Kamo Lano (usually known as Sultan Mudafar II Syah) won in the last april election for the national parliament a seat as a senator. A part of this parliament is made up of representatives special of their area and the people of a part of the area of the so-called Kesultanan Ternate, where the sultan stood candidate, choose him as their wished candidate to represent their needs and further things of their lives in the national parliament.
Since 1999 the Sultan of Ternate experienced some political problems. Then the N-Moluccan province was being shaped and some blame him for being to ambitious in that process. After the reinstallment of the structure Moloku Kie Raha (N-Moluccans to be seen as the area of the 4 kingdoms) the situation went slowly but surely more better in the Moluccans. In 2001 Sultan Abdullah Syah was installed as new sultan of a resurrected (nominal) kesultanan (in fact heir of the dynasty) of Jailolo, so the complete structure of 4 royal families of 4 areas was complete again according to tradition.
The Sultana of Ternate;Boki Dra. Nita Budhi Susanti Syah;was chosen in 2004 as the Ternate representative in the Indonesian national parliament. And she seemed to become that again in 2009. But suddenly Sultan Mudafar II Syah was favoured as a candidate and chosen;although he said to some people before, that he was already thinking of slowly but surely to witdraw for very active politics.
But probably he tought, that when his people called upon him to help them, he only could follow the wishes of his people to try to serve them.
His former political so-called rival;Sultan Haji Djafar Junus Syah of Tidore (Tidore was historicaly from time to time a bit the rival of equal powerful Ternate) was chosen in 2004 already as the representative of the part of the so-called kesultanan area of Tidore, where he could stand as a candidate and in 2009 again.
Only the Sultan of Jailolo, Sultan Abdullah Syah (complete name: Sultan Haji Abdullah Abdurachman Haryanto Syah) seemed to need more time to be rooted politically in his so-called kesultanan area. This is a very symphatic former army-officer known king just appeared the last 2 years in the political arena.
He was not chosen, but at least his people knew then, what were his ideas and how he acted as a real politician.
It is to be wished, that this warm personality also will be able to serve his people on a more higher level. So he will be seen in the future more;socializing among his people.

We are greatfull to Mister Bayu Maulana from the USA;official private assistant of HRH the Sultan Mudafar II Syah of Ternate and the site okezone.com to provide us with some interesting facts about these N-Moluccans elections for national parliaments, in which 3 of the 4 kings were candidates.

ate was pushed aside politically by the political system,because of his to ambitious nature,but now his own people has brought him back into the political arena and direct to the national Indonesian parliament.
He can serve his people very weel,because he has from his time as a young man until now very much political experiences;in succes and desillusion.

Of course this well-willing sultan wish many people a good political time.Probably his last term as politician putside Ternate proper,because when he is finished,he want to search some more easy tasks in his life.

Excuse me.The first word of the preevious message must be: "in fact".

That was an important reason,why Portugal and Holland wanted to have contact with the 4 sultanates of North Maluku.

Thanks ever so much, very useful article. If you do not mind, please visit my article related to travel to Pandeglang district in Banten, Indonesia at Kenali dan Kunjungi Objek Wisata di Pandeglang

In 2010 2 sons were tryint to become the new mayor of Terbnate city,one to becomwe the bupati in a distruct on the island of nearby Halmaheira and one son was preparing to later trying to become the new governor of the province of the North-Moluccans.

Excuse me for the to many faults in the message before.