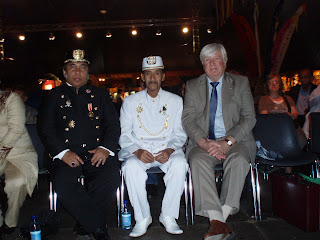 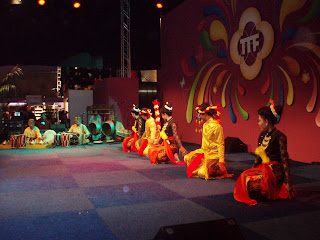 The triumph of the Royal Culture of Kutai in Holland

On the 25th of may 2009 it was finally the day of His Royal Highness the Pangeran Makhota,or Crownprince of Kutai Kartanegara:Pangeran Aji Adipati Prabu Anum Surja Adiningrat to try to see his house,where he was born in 1951 in the town of Wassenaar; near Leiden in Holland. There his father,who then was the crownprince of Kutai Kartanegara,was studying at the Royal University of Leiden.
The Crownprince returned as a boy of 5 years to Kutai. But first the Crownprince had to fullfill his duties to lead the cultural dance and musicgroup of Kutai Kartanegara at the Tong Tong Fair in Den Haag. That is for the present promotion of extraordinary places and cultures of Indonesia in Europe. First the Crownprince in the presence of the Chief of the Department of Economic Development of Kutai Kartanegara; Pangeran Gondo Prawiro with his wife,and their respective staffs were greated with extra respect by the organisation of Tong Tong Fair. Then the show of traditional and modern culture of Kutai Kartanegara began.A trully impressive show,which luckily also impresses the very big audience (the audience hall was filled until the last place) at the place of the dances and show of modern clothes with inspiration of local weaving traditions.
The royal dances,the general Melayu dances and the Dayak dances; accompagnied by the for Dutch ears very unique sound of Kutai music and also the modern clothes show took 75 minutes. The Dutch audience was same impressed by the unique Kutai culture, which was because of their liveliness and happy character very liked by the Dutch audience. After 75 minutes the total audience was very unhappy, that it already ended, because they found it less from boring. The Crownprince espacially was accompagnied by the representative of the Dutch National Council of Nobility: Drs. Ferdinand F. Baron de Smeth van Alphen (whose family was for generations very close to the Royal Family of Holland). The Baron has the last years a project to try to exchange experiences with the Royal and Princely families of Indonesia with the Noble and Royal families of Europe concerning theirfunctioning in the so-called modern time;espacially their value for preserving the old culture and some moral values as well. The Crownprince was very proud to explain time after time his culture to this important nobleman from Holland. Coming friday the Dutch nobility;lead by the Baron, will be present again at a show of Kutai and other Indonesia culture at a cultural day in Den Haag;organised by the Indonesian embassy in the Netherlands. The Dutch audience was also very impressed to have a real crownprince of Indonesia near them for am while and more,they were impressed because it was also the Crownprince of the oldest kingdom of Indonesia(Kutai already exists for 1600 years). After the event the Crownprince was not able to refind his house of birth. But that would come later. Together with Pangeran Gondo Prawiro and their staffs he had to do more work to strengthen the position of Kutai as a tourist destination and also had to talk with Dutch archive researchers to try to find more old historical Kutai pictures, films and other documents, in which they were quite succesfull. After a bit relaxing as well some times and trying the for their taste strange Dutch food (only the Crownprince was happy to again taste the food of the country), where he had lived the first 5 years of his life like cheese, milk, havermout (Dutch porridge) and the best strawberries of the world (from Holland).
At 22.30 the royal- and civil delegation from Kutai Kartanegara finally could lay down their duties for the promotion of the royal and general culture of Kukar in Holland and went exhausted to sleep. Many Dutch people only remained with one question:
where the Kutai Kartanegara dance and musicgroup had taken the enormous amount of energy with which they performed their culture; a culture which was trully not in their mind,but in their heart.
Kutai culture:a trully unique culture.And that is no flattering.

I saw one of your sites.Sorry,but better not play around with dangerous things.
Good luck.