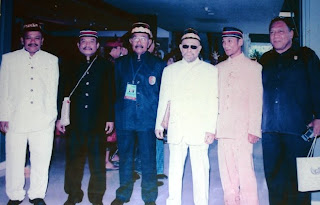 5 of the 9 monarchs of the main island of Papua during a national meeting of Indonesian dynasties.
From left to right:the raja of Fatagar, the raja of Rumbati,a former raja of Sekar, the raja of Arguni, a raja-muda (son of the ruler) of Kaimana and the Rat Umis of Kaimana. With thanks to His Highness Raja Abubakar Saleh Bauw of Rumbati for letting use this picture, royal organisation FSKN for the photorights and Her Highness Ratu Muda Arwan Heremba of Wertuar for research and further help.
In Papua there is an extraordinary principality called Arguni. Strong in some aspects of it's existance.
It's lying on the north part of the Bomberay peninsula.
Before it was an area,where the ruler was a representative of the once very powerfull and paramount power in a part of this peninsula: the raja of Rumbati.
Like Sekar, Wertuar and Patipi this area was ruled by clans, which delived rulers not with a raja title.
Later these areas became more and more powerfull themselves and could gain some amount of independence from Rumbati.
In ca. 1865 the ruler of Rumbati received the rajatitle from the paramount ruler in this area:the sultan of Tidore.
When the Dutch East-Indish Government really obtained the influence here at the end of the 19th century the raja of Arguni became more or less totally independent.
Sekar, Arguni and probably also Wertuar were later not ashamed to acknowledge the paramount position of Rumbati in the northern part of the Bomberay peninsula.
Nearly all of the 9 principalities in this peninsula had his own influence area outside his central area;mainly on the Bird's Head peninsula.
These influenced was reduced more and more.But strange enough only in the Arguni area this influence remained very strong.Only in 1928 a begin of a reduced influence was started (the 2 areas of Arguni then were in 2 seperate districts).

The raja of Arguni also was always known a a strong bringer of the islam religion in his influence area.
The Arguni area was known as the area of the excellent boatmakers. The Arguni boats (for business for instance) were always real bigger than the used boats in the other Bomberay principalities.
Also the pottery and the sagoproduction in Arguni is well-known in the area.
The raja dynasty has strong descent connections also with Ceram.
The businnes principalities of the Papua Bomberay peninsula were always strong in trading with the areas around them.
These activites remained strong later.The present rajas are nowadays also engaged in business, or/and are engaged in local politics.
Before Arguni was quite densely populated. Later the amount of population diminished a little.
Arguni is described in the modern time maybe not as the most richest principality in this area, but for sure one of the most remarquable principalities.

Raja Hanafi Pauspaus of Arguni is a landowner and engaged in agriculture.

Indonesia
Visit here to get information about indonesia tourism