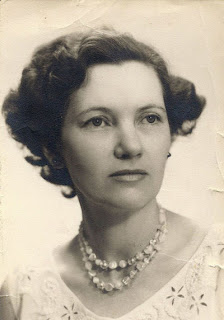 On the 19th of june 2010 the last Dutch woman, who ever was queen of one of the 300 principalities of Indonesia died at the respectable age of 95.
It was Sultana Maharatu Mas Makhota of Pontianak, who was the wife of Sultan Syarif Muhammad Hamid II Alkadrie,who ruled 1945-1950(/3).
She was born 5-1-1915 in a plantantionfamily;but also already with a slight amount of royal blood in her,because her forefather was the adatuang (raja) of Sidenreng in SW-Sulawesi:La Wawo (ruled 1831-1837).
In the end of the 1930-ies she married the young prince Pangeran Syarif Hamid Alkadrie,
who then was the 2nd in line in the succesion of his father.
She begot 2 children, of which only a son Max Yusuf Alkadrie is still alive.
After the Japanese had murdured in 1944 many royals of West-Kalimantan, she became to her surprise in 1945 suddenly queen of Pontianak, when her husband was chosen as new sultan of Pontianak on 23-10-1945.
In the difficult time after the Indonesian independence declaration and before, that Holland gave total independence to Indonesia, the sultan sended his family to Holland for safety reasons and they never returned permamently to Indonesia.
During the difficult time for her husband (he was falsely accused of treason and after his release he was again in the 1960-ies sended to the prison for so-called rebellion), she always supported him and also never forgot Pontianak. Many things she did with the help of Dutch investors.
Her husband died 30-3-1978 and they always kept a high respect for each other.
Until very high age she always kept her interest in Indonesia and this high respectable and intellectual wife, who always had a mild effect on the Asian temperament of her husband, was rewarded with a statue in the garden of the sultan's palace.
In april 2010 her son Pangeran Syarif Max Yusuf Alkadrie went to Pontianak after 32 years;to meat his family, discuss family affairs and also to meet the Indonesian historian Mr. Henny Mahendra from Jakarta, who was doing a research to show the truth, that the accusations,that Sultan Hamid II had betrayed the Indonesian revolution was 100% untrue.
Not long after the stephsister of Sultan Hamid II had died in Holland, also the sultana;
born as Dina (Didi) van Delden in Surabaya;had found now peace, that others now finally were working to clean the name of her so beloved husband.
Very peacefully on the 19th of june 2010 the Dutch queen of Pontianak died in her hometown of Den Haag.
She was one of the Dutch ladies,who had met an Indonesian crownprince and married him, so later became queen in an Indonesian monarchy.
Not only because of the status of her husband,but also because of her character, she was maybe one of the best known Dutch queens in Indonesia.
May she rest in peace and may her remembrance not be forgotten.

beautiful blog..pls visit mine and be a follower.. thanks and God bless..

beautiful blog..pls visit mine and be a follower.. thanks and God bless..