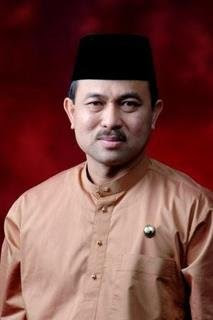 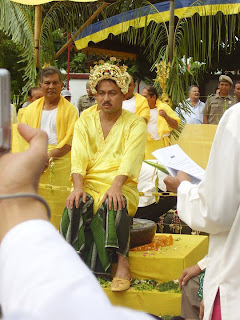 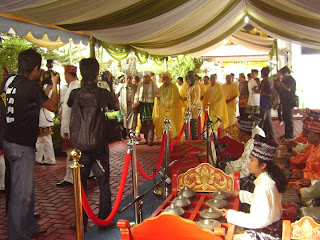 The Banjarmasin area;once one of the 4 biggest kingdoms on the island of Borneo/Kalimantan has witnessed from 10-12 december 2010 the installation of it's new dynastychief;150 years after the Banjarmasin sultanate was abolished 11-6-1860.
The new dynastychief is Pangeran Khairul Saleh, who is now also having his 2nd term of office as bupati/districtchief of Banjar;the central part of Banjarmasin.
Not only the Indonesian government sended high officials for this royal installation like the minister of Culture and Tourism Mr. Jero Wacik, but also Governor Rudy Arifin of South Kalimantan (the province in which the kabupaten Banjar is lying) and other high local government officials were attending.
Apart from the civil government also many dynasties (as representatives of the dynasties of their areas) attended.
Also the chief of the council of South-Moluccan nobility clans were attending.
Of course the several branches of the sultan's dynasty itself was invited and all attended.Even the clan formed by the descendants of a son of the last sultan of Banjarmasin and a Dutch woman were to be seen at the ceremonies.
This Holland prince of Banjarmasin;Mister Dick Eysma from Kota Zoetermeer;went back again to the place, which he had seen for the last time 29 years ago.Then also he made a journey to commemorate his royal ancestors in the area where he was born 69 years ago and which he left in 1948.

The ceremonies took place in 3 days. The first day was concentrated on the baduduk, or ceremonial ritual cleansing ceremonies for the dynastychief and his most closest dynastic officials.
The 2nd day was concentrated around the arriving and greeting welcome of the high civil politicians and the dynasties from Indonesia, Malaysia and Brunei.
The 3rd day the actual installation and also the official confirmation of the pangeran title took place.
That last day was of course the most colourfull and intensive cultural event.
Also a little historical photo exhibition;sponsored by the Holland National Council of Nobility (Nederlandse Adels Vereniging);was then opened.
That organisation is normally represented at such royal occasions by Drs. Ferdinand F. Baron de Smeth van Alphen from Amsterdam,whose National Council of Dutch Nobility is trying to exchange experiences with the Indonesia royalty about their functioning in the so-called modern-time.
Because of health reasons the baron was represented by Gusti Yulianitha Tick from Balikpapan (descendant of the last local recognized ruling sultan of Banjarmasin;Sultan Adam Alwatzikubillah (1827-1857), who is also the wife of Donald Tick, the secretary of the Documentation Centre of the Indonesian Dynasties (Pusat Dokumentasi Kerajaan2 di Indonesia "Pusaka",who organised the exhibition.

Later,when the more detailed information about this 3 day royal installation will reach us together with the beautifull pictures around this important event, we shall put another article here about it.