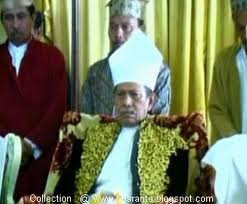 Recently the news reached us,that one of the 4 sultans of the North-Moluccan;Sultan Abdullah Syah of Jailolo;has been deposed by his paramount overlord Sultan Mudafar Syah II of Ternate.
That happened 20-11-2010.
The story is like this:
Before Jailolo was an independent kingdom.
Ca. 1550 Jailolo came under the influence of Ternate. One source said,that the last descendant of the kings of Jailolo (then called a raja) died in exile on Ternate in 1715.
But the members of the direct line, or the Doa line claim, that with that fact the rights to the throne of Jailolo had not been ended. From 1715 the rights to the raja title went to a side line. From there the rulers of the restored Jailolo sultanate descended:Raja Muhammad Arif Bila, who helped ca. 1800 the rebellious Sultan Nuku of Tidore;a national Indonesian hero and later after him his 2 sons, who only could rule over a segment of the Jailolo people, who were allowed to resettle themselves in the north part of Ceram and after the last sultan of jailolo there was deposed went back to Jailolo in Halmahera totally.
The last sultan there was deposed 1832 (Sultan Muhammad Asgar;died 1839),because he not really coöperated with ending the piracy in the area. A descendant from that line;Dano Baba Hasan;was pretender sultan 1875-76 and his descendant;Dano Jaeuddin;also was pretender in 1914.
A descendant of Dano Baba Hasan was discovered in in Sumatra by Sultan Mudafar II Syah. He had a plan to make the system of 4 kings/Maloku Kie Raha;of again functioning to give stability again to the area.
So in januari 2002 Sultan Abdullah Syah was installed by the sultan of Ternate as a sultan, but in fact the paramount function of Ternate over Jailolo had not been ended then.
So in fact it was more a coöperation between the 2 sultan systems.
That functioned very good for a long time,but this year the sultan of Jailolo had a different choice for a bupati of a local district and that was not very much liked by the sultan and sultana of Ternate,who felt a sort of betrayed.
After the sultan of Jailolo was deposed, the functions were temporarily taken by an official called Ilham Dano Tokan.
No further real developments were noticed in this matter.

Some say, that the branch of the dynasty of which he belongs were always a bit seen as the Tidore branch. Tidore is in history the rival of Ternate.
Sultan Muhammad Arif was also pretender to the sultan's title of Tidore later.
The Doa line now hope, that there will be a chance to reclaim with succes their own rights to the sultan's title.

Like always we hope, that the harmony will be restored soon.

Thanks for the information. "Bhineka Tunggal Ika is the best"