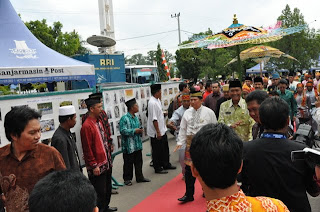 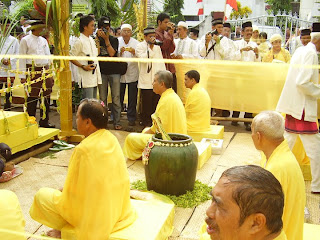 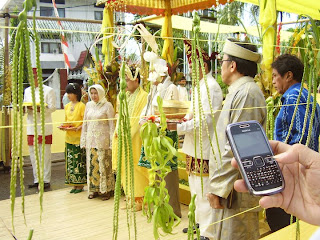 From 10-12 december 2010 we saw the accumalation of a cultural revival process,t hat took place in Banjarmasin the last 10 years.
Then the bupati of Banjar was installed as the new raja muda/chief of the sultan's dynasty of Banjarmasin.
This royal installation was characterised by the facts, that really all was wished to be done perfect and complete.
The sultanate of Banjarmasin was abolished after a time of internal struggle on the 11th of june of 1860;so exactly 150 years ago.
Holland reorientated itself about the function of the Indonesian dynasties around 1939 and had then the plan to restore the sultanate of Banjarmasin and the nearby in the so-called Tanah Bumbu-area lying 7 principalities (abolished from 1905); strongly related to the Banjarmasin dynasty.
But the realisation of the plan was hampered by the WW II and the then following independence struggle in Indonesia.
The once very influential dynasty of Banjarmasin;being then one of the 5 main dynasties of the island of Kalimantan/Borneo;had always preserved as good as possible it's cultural heritage and knowledge of it's history.
The present dynastychief;then still called Gusti Khairul Saleh;was in 2000 still a high governmentofficial in the town of Banjarmasin,but then already had organised an organisation to preserve the cultural and historical heritage of the total Banjarmasin area.
It even published then already it's own magazine.
Also the fact, that the people of Banjarmasin;known for it's pietist religious life and the with that connected friendliness;kept their interest in the history, fascilitated the cultural revival of the area.
Yes, Unity in Diversity is the slogan of the coats of arms of Indonesia (Bhineka Tunggal Ika), so a more stronger sense of your own local culture means, that you also can stay more strong towards the national cause.
That was also the aim, that the sultan's dynasty and the local government had in the royal installation project.
Everything during these 3 days were perfect and complete.
Not only there were genuine installationceremonies,but also an unique photoexhibition of Indonesia kings in history. That also gave a good chance to all the people there to be educated about their own history.
That exhibition was sponsored by the National Council of Dutch Nobility (Nederlandse Adels Vereniging), who together with the European Union of National Nobility Councils (Cilane) has a project to exchange experiences with the Indonesian dynasties about their function in the so-called modern world and where it is possible to further support each other.
Very active for years in this project was their much active representative Drs. Ferdinand F. Baron de Smeth van Alphen, who was this year represented at this royal event by the in Holland based secretary of a documentation institute about the dynasties of Indonesia
(Pusaka);Mr. Donald Tick and by Drs. Gusti Yulianitha Tick;a direct descendant of the last locally recognized ruling sultan of Banjarmasin (Sultan Adam).
The in Indonesia still very lifely traditional culture and relative active functioning of the local royalty is a stimulating factor for the European nobility .
The very detailed archives and the philisophy of the European nobility about their functioning in the so-called modern world is a factor of learning also for the since ca. 10 years really cultural reviving of the Indonesian dynasties.
The perfect way, how the royal installation had been done can be described as an example for such matters in Indonesia.
The different branches of the dynasty with equal rights to the dignity of chief of the dynasty were also asked for some advise and also invited. All came.Also the general traditional and religious leaders and of course the civil government were asked for advice and invited.
Even a branch of the dynasty,living in Holland;was invited.
Because Banjarmasin was lying on an island (relative isolation) the history of Banjarmasin mainly happened on the island of Kalimantan, or Borneo.
So;much royal intermarriages and political bonds were made in history. Even some other principalities on the island were founded by sons of Banjarmasin sultans.
That is why the whole organisation first concentrated concerning the invitations to invite as much as possible the royal and princely families of the island itself. But of course also many dynasties, who represented the other ca. 250 dynasties of Indonesia.

Because it was already 150 years ago, that the dynasty really functioned as a ruling dynasty, the related dynasty of Kotawaringin (S-middle Kalimantan;founded by a son of a sultan of Banjarmasin), who functioned as a ruling dynasty until the end of active existence as such in the Dutch time(ca. 1949)was asked to control the plans for the installation.
And even really participated in the actual royal installation.
It was all a colourfull, interesting and quite elaborate royal cultural event, who was attended by a lot of dynasties from Indonesia,Malaysia and Brunei.
So you could see a diversity of displays of royal culture as well like the dynasties of Bulungan, Sambaliung, Gunung Tabur and Kutai (East-Kalimantan), Kotawaringin (S-middle Kalimantan), Tayan (representing the council of monarchs of West-Kalimantan, who were at that time very busy with their own cultural festival), Mamuju and Binuang from West-Sulawesi, Buton from SE-Sulawesi, Sanrabone from SW-Sulawesi, Badung-Pemecutan from Bali, Sile Dendeng from Lombok, Surakarta and Pakualaman from Java, Siak from East-Sumatra, Palembang from S-Sumatra, a representative of the S-Moluccan areas nobility in the person of the raja of Mamala, etc.,etc.
The Malaysia royal world sended a delegation from the sultan's dynasty of Selangor (founded by a prince from the Sulawesi kingdom of Luwu) and also the sultan's dynasty of Brunei was represented.
The whole installation project was also supported by the Indonesia organisation of representation of the Indonesian dynasties FSKN (Forum Silaturahmi Keraton se Nusantara) under the hardworking leadersship of Kanjeng Pangeran Haryo Gunarso Kusumodingrat;known generally as Pangeran Gunarso.
The present dynastychief of Banjarmasin;Pangeran Khairul Saleh,is a good person for the dignity of chief of the sultan's dynasty of Banjarmasin in this so-called modern time.
Being descendant of the brother of Sultan Adam (the last local recognized real ruling sultan) and married with a descendant of a Banjarmasin sultan as well,he already has the royal charisma(also not unimportant in Indonesia).
That combined with his true idealism to revive the love for the local culture and history he must be the good man/royal on the right place.
Most of the people are convinced of his honest and non-proud intentions towards it.
It is hoped,that the good God will preserve his total idealism in this way.
His next step in his realistic dreams is to rebuild the sultan's palace as a symbol of the local culture,but also as a eyecatcher for tourists.
The palace must be finished in 2011.
That is of course also to the interest of the Indonesian central government,who more and more has focussed themselves to the local culture as one of the main interests for the tourists. So hereby tourists can play a role in reinforcing the local feeling for it's own culture in a genuine way.

Mr. Jero Wacik;Indonesian minister of tourism and culture was because of all of that togerther with Governor Rudy Arifin of South-Kalimantan some of the most important guests at the events.

Hopefully this inspiring line will be followed in the general and royal cultural revival.