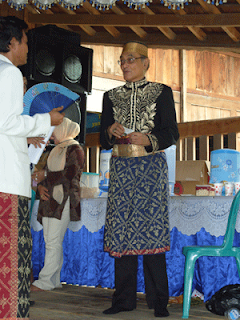 H. Daeng MA Kaharuddin officially designated as the Sultan of Sumbawa with the title of Sultan Kaharudin IV. Determination was made through Musakara Rea Institute of Indigenous Tana Samawa 2011 workshop held at the Palace of 8 to 10 January 2011. In this activity all the elements of community representatives from the two districts of West Sumbawa and Sumbawa agree with the proposed DMA Kaharudin as the Sultan of Sumbawa.
Based on the assessment letter inaugural number: 05/MR-LATS/2.1/1432.2011 dated 10 January 2011 or 6 traveling Sultan of Sumbawa in 1432 on the inaugural set, DMA Kaharudin confirmed as the Sultan of Sumbawa with the title Sultan Muhammad Kaharuddin IV. In an assessment is also outlined the duties and responsibilities as sovereign among other things, mandated to be able to preserve and develop indigenous tana Samawa, also towards the achievement of tana Samawa religious society, modern and democratic.
Assessment letter was read out at the end of the event Musakara Rea by mohammad Syaikhu Rauf promptly at 16:45 pm.
Various considerations are also presented in the decision letter include the appointment of DMA Kaharudin as the son of Crown Sumbawa 5 April 1941.
With this assessment letter dated 10 January, it officially Sumbawa has had with the title sultan Sultan Kaharuddin IV.
Meanwhile, the Sultan Kaharuddin IV in his speech began after approval by decree, saying that the coronation of himself as the sultan was the mandate from the people.
The change towards a religious society, modern and democratic beginning of this sekarang.Hal era due to the challenge. In the face of the current era needs clear thinking and left everything to Allah SWT.
Also in his first speech, the Sultan Kaharudin IV entrust greetings to all the people and know that he is ready Samawa as sultan.
"Bismillahirrohmaanirrohim," the Sultan presented the first time to receive and execute tasks as the Sultan of Sumbawa IV.
Meanwhile, the atmosphere of the palace in a workshop filled with cries of joy at the moment penitia submit an assessment as Sultan. The atmosphere of emotion with shouts of Allahu Akbar and ACCOMPANIMENT Solawat Badr decorate and color the atmosphere of the palace in the workshop at that time.
All participants who attended also took time to shake hands with the newly elected emperor.