Delayed 36 Years, Coronation of the Sultan of Sumbawa Attended by Thousands 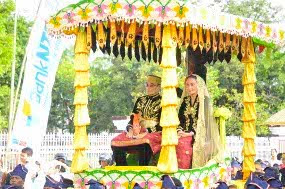 Marked by the customary coronation procession which started on Monday (05/04/2011) morning. Paraded from the Palace Sultan Yellow Bala, along empress use a litter with yellow decorations, called July. Since early morning, the bell at the palace was struck, marking the traditional start of the procession.

Emperor and empress, Andi Tenri Djadjah Burhanuddin paraded while accompanied by troops armed with a lance and the district chief's palace, with typical tambourine music Sumbawa. Together empress Bala Yellow Emperor out of the palace with readings Shalawat Prophet Muhammad.

Thousands of people thronged both sides of Jl Dr Wahidin and Jl Sudirman, protocol roads sultan's entourage passed. The group moved from the Palace to the Palace of the Yellow Army Loka, wooden palace of the Sultanate of Sumbawa in 1885 made earlier.

In the old palace, the Sultan and Permisuri a short break, before heading to the Great Mosque Nurul Huda, where the coronation took place.

In addition to the community, the coronation ceremony attended by several kings, including King of Denpasar IX, King Niki Niki, South Central Timor, NTT, King of Gowa, South Sulawesi, and also Gusti Hemas Queen of the Sultanate of Yogyakarta.

Governor of NTB, M Zainul Majdi with provincial government officials and the Sumbawa and West Sumbawa regency is also present in the arena of the coronation. Sultanate of Sumbawa includes West Sumbawa and Sumbawa.

Sultan vowed as a man who was destined as the Sultan. It contained, among others, when the Sultan was not fair then he would be cursed Al Quran 30 Juz. After the oath, the Sultan inaugurated next board Adat Tana Samawa.

Sultan spent much time outside the island of Sumbawa. He's a career at Bank Bumi Daya, before it merged into the Bank Madiri. In the state-owned bank, the last Sultan as Executive Vice President, and retired in 1998.