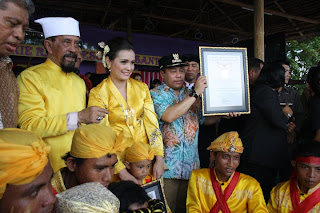 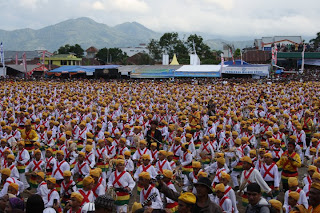 On the 3rd of april 2011 an extraordinary thing happened near the palace
of an Indonesian king:he made a world record!
Also the first time,that an Indonesian king made a world record.On that day
the charismatic Sultan Mudafar Syah II of Ternate(full title:Sultan Drs.
Mudafar Syah II Masjur Kamo Lano;king since 1975;one of the first kings,who
dared to come forward again fully as a king in modern tme Indonesia)had asked
his people to perform the traditional local dances before his palace at one
time all together to express the gratitude,that he became 76 years on that
day.
Already the sultan of Ternate was known for his courage to perform certain
matters before;really become internationally known a such,when he was in
1987 one of the first of the 300 Indonesian monarchs,who dared to let fully
do the coronation ceremonies for his coronation;a thing before considered
as an unwanted thing from the past.
This year again Sultan Mudafar Syah II organised the Legu Kam royal festival;
a festival taking place from the 1st to the 15th april;celebrating his birthday.
This festival was reorganised since some years,being also a major touristic
happening in the North-Moluccans.
The sultan wanted to do something special now,so he could make it happen,that
on 3 april 2011 8.200 of his people danced at one time for him all in the
clothes of servants of the royal court;partly accompagnied by in the same
royal court manner dressed traditional musicians.All taking place on the
field before the royal palace.
When the dance was finished and all the number of people participating in
the dance were controlled,the sultan and his sultana Dra. Nita Budhi Susanti
Syah could receive an official document from a to the Guiness Book of Records
attached official,that the Sultan of Ternate had broken a world record for
dancing with such a hugue amount of people at one time.
This matter also made a strong point of identity of the Ternate people towards
their king and a good promotion of the North-Moluccan culture internationally.

With thanks to Gusti Maulana of the royal court of Ternate to give us this
information.

hi. anyone from the Ternate sultanate interested to correspond for exchange of historical info with sultanates in mindanao?

Dear Sir; I am of the royal court of Kupang/Timort and also owner of this blog.I know the royal family of ternate,but also I am interested in the royal families of Mindanao,because together with the ojneś of Indonesia I am contributing to an encyclopedia about it. You can contact me at pusaka.tick@tiscali.nl . Thank you. Yours sincerelly: DP Tick gRMK/Pusaka Holland