THE PEOPLE OF TOLITOLI STILL LOVES IT'S DYNASTY 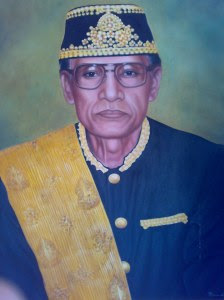 H. Moh. Anwar Bantilan
Since the decentralisation laws in 1999 in Indonesia several dynasties here not only came back culturally and socially,but several also still seemed to have still strong contacts with their people and were seen as for instance strong identification points for their people and were trusted to be good local rulers.

Of course many dynasties in Indonesia then tried to also to function again politically,but not many for instance present day nominal rajas were succesfull in that. The problem is, that after the Second World War the raja dynasties were a bit seen (but not was) merely to be the aid of the colonial power Holland and also a rajaship was not democratic enough. So theye were pushed aside a bit and at the present time still must be rooted more in the present day political life.

Later the peoples also found out,that the rajasystems had not only it's disdavantages,but also their advantages as being the cultural centre for the local identity and also, when the moral values were used in a good way,had also a sort of democracy in itself and also a listening ear of the raja, or sultan, who could act as a father of his people.
So then it was found, that the modern system and the traditional system could exist next to each other and could enrich each other.

The only really permamant example of a raja,who also was a local highest ruler is in the Yogjakarta special province. Because of the role the former sultan of Yogjakarta and the pangeran of Pakualaman played in the independence struggle they were awarded by a heriditary governor- and sub-governorship.
Of course we also have examples of high princes and even dynastychiefs, who could obtain the local highest rulership. Like in Bima on Sumbawa, where the sultan is also the bupati, or in Banjar(masin), where the chief of the dynasty is also the bupati.
Similar exapmples can be seen in SE Bali recently (kabupaten Badung and the city government of Denpasar), or in the Kabupaten Donggala,where until his death in 2006 the mokole of Banawa was also the bupati.

The story about this remarkable, but outside Indonesia not very known dynasty is like this.
The raja dynasty of Tolitoli (the name derived from a local word meaning three, because the area was formed as a principality by three living peoples here) already ruled here during not a few centuries and delivered in total 28 rulers (the area was also ruled further for short times by regents coming from outside the dynasty).
It all began with Dattu Amas,who was the first ruler of the major people in the Tolitoli area.In the early 19th century a certain Timumun more unified the area and took the name Sultan Jamalul Alam (also known as Sultan Janggu Bantilan Syariful Alam Syah (later the rulers of Tolitoli did not use much often the sultan's title). He is een as a sort of founder of the ruling dynasty in it's present form.
The dynasty already had for a long time a close relationship with the nearby lying principality of Buol;sometimes even a raja of Tolitoli was also a raja of Buol.
The turbulence in the political atmosphere arose,when the greatgrandson of Sultan Jamalul Alam;Raja Haji Abdul Hamid Bantilan(ruling from 1867) died end may 1905.
His son Raja Muda Tegelan Muhammad Ali Bantilan was then already selected as the crownprince, but was considered then to young to become raja.
An uncle then ruled for 13 years.In 1918 the political atmosphere was then a bit changed and the raja said, that he only wanted to abdicate, when his son could become his succesor.There were then 3 pretenders.That son was however killed in 1919.Before he was chief of the local branch of the nationalistic organisation Sarekat Islam, but for the harmony in the area, he gave up that function.The S.I. however then gave a honourary presidency of this S.I. branch to the crownprince, who was still considered by a big part of the people as the actual heir to the throne.
The killed raja (or better chief of the ruling council) had before convinced the crownprince to, lay down his claim for the sake of harmony in Tolitoli.
In may 1919;before the regent was killed, there was a proposal to make the crownprince anyway the raja,but when in a Sarekat Islam incident the regent was killed, Holland did not find it a good idea to go on with the idea of making the crownprince the raja, because of his honourary chief function of the local S.I. and probably more involvements in the local political play.
So then a brother of the regent ruled as raja until he abdicated in 1926.
The crownprince already had died in 1923. Then the eyes of the people and the local Dutch government officials fell on his nephew Prince Mohammad Yahya Bantilan. He was made raja in 1926, but after 3 years it was decided to depose him, because he was considered to be to much nationalistic for the harmony in Tolitoli.
Then the rule was done by a colonial official from outside,who ruled until he was killed in 1942 during some political troubles with a nationalistic atmosphere. Then the Japanese occupation force invited the ex-raja Moh. Yahya Bantilan back to become raja again. In that period he was known as a very nationalistic ruler.
When Holland came back the raja was deposed for a 2nd time.
At that time the nationalistic emotions were very high, but the people were a bit tired of all the struggle and only wanted harmony back in Tolitoli.
A local influential family;Pusadan;then delivered 2 rulers for Tolitoli (regents).
The ex-raja still had a big symphaty in Tolitoli, so on 12-1-1957 he was proclaimed the official traditional (nominal) raja of Tolitoli;so the royal symbol for Tolitoli;as a thanks for his constant nationalistic struggle.

In the modern time Tolitoli and Buol formed a kabupaten(district)together, but in 1999 the central Indonesian governement allowed, that Tolitoli became a seperate kabupaten.
Because of the role Raja Mohammad Yahya Bantilan like the sultan of Yogjakarta had played before, in and after the 2nd World War for the nationalistic cause and because he had always inspirated his in 1942 born oldest son Prince Haji Mohammad Maruf Bantilan to be a good and wise ruler, the reputation of this son was then quite strong in Tolitoli.
In the same year of the decentralisation in 1999,which also meant more freedom for the dynasties to think about installing their own dynastychief again, there was also an election for the bupati of the new kabupaten Tolitoli.Prince Marif bantilan also had worked hard for a seperate kabupaten of Tolitoli. At that time he was also the heir of the raja title of Tolitoli.
But because he wanted to serve his people as bupati, he decided to campaign for the bupati function and gave the raja dignity to his uncle Raja Haji Mohammad Anwar Bantilan, who is still the present raja.
Prince Maruf Bantilan won the bupati election and in 2005 again, so he ruled as bupati until 2010.
His quality as a dedicated ruler already had spread over the province of Middle Sulawesi/Sulawesi Tengah, so he decided now to try to serve his province as a governor.
His cousin;the in 1959 born Prince Mohammad Saleh Bantilan;the son of the present raja, also had the ambition to serve his people as bupati and he already was known then as chief of the local parliament.
Prince Maruf Bantilan was a strong candidate for the governorship of Sulawesi Tengah,but just lost on 6 april 2011 against another strong candidate of the royal blood:Prince Longki Djanggola;a main descendant in the direct line of the mokole's of the important principality of Palu.
Prince Saleh Bantilan was chosen by his people as the new bupati of Tolitoli; an area of 4.079 km2 with in 2008 210.000 inhabitants.

We hope, that this dynasty will be able to serve it's people for a long time.

So help them God!

You did really a great job. I found your blog very interesting and very informative. I think your blog is great information source & I like your way of writing and explaining the topics. Keep it up. I'm going to follow your blog.
Online Generic Viagra

Wow! This can be one particular of the most beneficial blogs we have ever arrived across on this subject. Actually Magnificent. I am also a specialist in this topic so I can understand your hard work.

Nepal radio Online
In the modern time Tolitoli and Buol formed a kabupaten(district)together, but in 1999 the central Indonesian governement allowed, that Tolitoli became a seperate kabupaten.
Because of the role Raja Mohammad Yahya Bantilan like the sultan of Yogjakarta had played before, in and after the 2nd World War for the nationalistic cause and because he had always inspirated his in 1942 born oldest son Prince Haji Mohammad Maruf Bantilan to be a good and wise ruler, the reputation of this son was then quite strong in TolitoliWatch World TV Online

Want to make money like crazy...Come n join us.
No product Selling, No Requirement, No MLM & No Scam
we are looking for potential investors.
For more info pls visit my blogspot

www.vggreatinvestment.blogspot.com
You also Can Register Free Account
Ref:155555575384
we are Only Looking for A person Have Big Dreams.