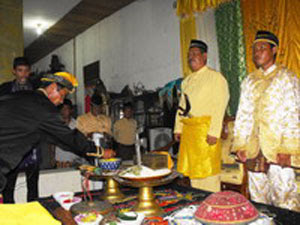 Gusti Muhammad Efendi Bin Sidik Gusti Agung be as Pangeran Agung Muda, King of Sekadau (W-Borneo) which took place in the dwelling house H. Umar Jhafar, Saturday 28 February 2009.
This Installation king was attended by the Sultan of Sintang, multi-ethnic people, Muspida elements, and the Malay community of Sekadau District.
Before installation, the king of cultural welcome the arrival in the Tar Music and accompaniment tracks typical Malay Sekadau. Then the King going to seat have been provided in the style of the kingdom and close by two guards the left and right. Gusti Muhammad Efendi looks stout with the wear yellow.
After that, the procession begins with the greeting words of the head of the council's multi-ethnic tradition. Words from the speech delivered by the head of the customs of each tribe of which the Chairman of People Assembly Culture Malay, Dayak Adat Council Chairman, Chairman of the Assembly Tionghua Ceremony, Chairman of the Assembly and Indigenous Konghucu can be concluded that, hopely the King can work together excavate potential in the cultural-District Sekadau.
In fact, all the customary council hopes, the relationship between ethnic cooperation in the District Sekadau can walk better than before. Thus the form of life in all aspects can walk better and harmonious.
So, community Sekadau could be an independent and democratic. On occasion it also Sekadau District Chief (Camat) Jhoni the word speech, said expected to be working with both potential and can dig a very big culture in the District of Sekadau.
Installation King is seen as glorious atmosphere of solidarity between ethnic attend these events. It start by rituals and customs around the seat of King confetti by yellow rice and some dishes that has been provided in the front seat of King.
Together with the installation King also held a music and songs brought by two groups.
At the end, Culture and the King appear with delegation of various ethnic taking picture together and After the King Sekadau get congratulation from the invitation that came from.

The new raja is standing on the left.