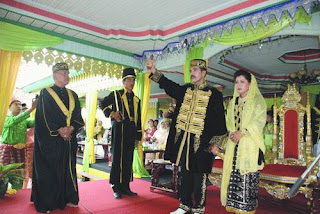 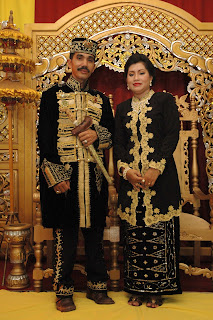 New King and His Wife 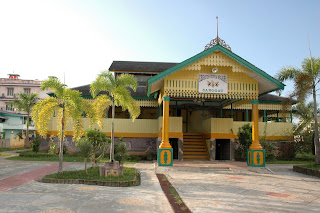 Surya Negara palace of Sanggau (W-Borneo) now has a new king that installed by the State of nine guardian of the country, Sunday (26 / 7/2009) morning.
New leaders are H. Gusti Arman that the name of the queen at this time is Pangeran Ratu H. Gusti Arman Surya
Negara.
Witnessed with the Sultan of Palembang Darussalam, Regent Sanggau, the king and the sultan's all except West Kalimantan Pontianak Kadariah palace. Complete Installation is implemented handover of Keris Pusaka Kalima Sani by H. Gusti Gusti H harbani bin H Gusti Muhammad Saleh Bin Gusti Muhammad Umar Bin Pangeran Paduka Surya Negara, held next laying crown by H Muhamad Arif Bin H. Ade Ahmad Arif bin Panembahan H. Ade Muhammad Paku Negara accompanied with cannon boom as much as seven times, and Tar Music.
The Installation of Pangeran Ratu H. Gusti Arman Surya as holder of the calyx leadership is based on lineage and the first made by consensus elders and relatives of the palace.
Prince Ratu Gusti Suryansyah as Chief of Ismayana Palace of Landak and also chief of Forum Silaturrahmi Keraton Se-Nusantara at West Kalimantan said that with installed the new leaders, can together take pride of Keraton in Indonesia in order to preserve the culture and customs.
"With the revitalization of the entire palace Indonesia will be risen preserve our culture but still in the NKRI ,"said Prince Ratu Gusti Suryansyah.
According to him, for many this was a hereditary kingdom was gone from original place, or submitted to the government, so that the heritage collection should be done.
Pangeran Ratu Gusti Suryansyah request to the government, itself felt sad because during the time the goods are handed heirdom managed not even impressed with the good neglected.
"I'm sad to see heritage and not only be maintained by the board," said Pangeran Ratu Gusti Suryansyah.
Also that with the return of this palace, does not no of intention to establish the state of the country, because since the Indonesia free country then it is no longer a valid or kingdom palace. Likewise what is presented by the Sultan of Palembang Darussalam, Sultan Iskandar Machmud Badarudin Syah, Sultanate palace as the Association of Indonesia (AKKI) that with the emergence of the kingdom and the palace have been lost during the absence of the management or leaders, hoping for them return together to maintain unity of Indonesia, the government as a partner.
"We stand as a community partner, and the government involving the palace and took over of Indonesia in building this country, "said Darussalam Sultan Iskandar Machmud Badarudin Syah.
Pangeran Ratu H. Gusti Arman Surya Negara recently in the near future along with his colleagues who have palace, re-collect what that this gap has been split, both genealogy and other matters related to the other palace.
"I suggest to the entire family can gather in the deliberation complete what is becoming a problem, let us together raise Surya Negara pride of the palace, "said Pangeran Ratu H. Gusti Arman Surya Negara.
Regent Sanggau, H. Setiman H. Sudin said that with the return of filled vacancy leadership in the palace Surya State then expected this many inputs and information in order to promote Sanggau fore. "I'm sure Pangeran Ratu H. Gusti Arman Surya Negara can unify togetherness and the future together government can bring the name into Sanggau the front, "said the regent.
In the Installation also inaugurated the use of Keraton Surya Negara and Masjid Jami' Sultan Ayub with the inscription, and the beating beduk preceded and followed by the regent and the king of all the sultan.
Presenting in Installation, the Sultan of Palembang Darussalam Sultan Iskandar Machmud Badarudin Syah, Pangeran Ratu Gusti Suryansyah, the king's palace Ismayana Landak, Sultan Istana Al Mukaramah of Sintang, Sultan Kesuma Negara V Pangeran Ratu Sri Negara H.R.M Ikhsan Perdana, King Palace Amantubillah Mempawah Pangeran Ratu Mardan Adijaya Kesuma Ibrahim, the King of Sekadau Pangeran Agung III Gusti Muhammad Effendi, King of Sampang Sultan Muhammad II Jamaludidin H. Gusti Mulya, Matan Kingdom
Pangeran H. Uti Kusnadi, and Pangeran H Gusti Kambodia. Prince of Tayan Gusti Syarfani, and stakeholders Kubu kingdoms Daulat Alamsyah Syarif Achmad Al-Idrus.