Main Palace of the Emperor of Minangkabauw burnt down on 21th March, 2010 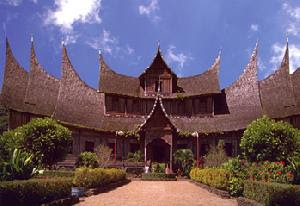 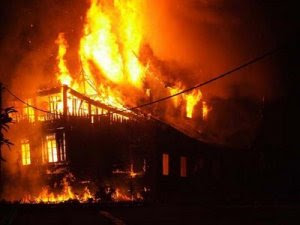 Some disasters are following the last time the Imperial dynasty of Minangkabauw,or Pagaruyung in West-Sumatra.
On 27-2-2007 THE symbol of Minangkabauwculture;but not the main palace of the imperial dynasty of Minangkabauw;the Istano Basa Pagaruyuang was burnt down.
At this moment the rebuilding activities are nearly finished so the new palace at Batusangkar could be reopened with big festivities. A joy for the Minangkabauw area and also of Indonesia in general a bit,because this palace is seen culturally as one of the main palaces of Indonesia.
But at 01.00 A.M. the main palace of the Imperial dynasty of Minangkabauw, or Pagaruyung;the Istano Silindung Bulan;also at Batusangkar;was burned down and now there were very strong proofs that is was set onfire.
The from wood built very traditional palace was burned down totally.
There are rumours going on now in all kind of networks on internet for instance,that it was done,because of a rivalry inside the network involved with traditional matters in the area,which would like to see promoted the nearlty rebuilt palace Istano Basa Pagaruyuang; a museum; as the main palace of the area,instead of the Istano Silindung Bulan.

We hope, that matters will be come to total harmony again.
We also hope to inform you in due time about this matter.

We thank Mr. M. Safuan from Malaysia for giving us a link on internet to the matter.