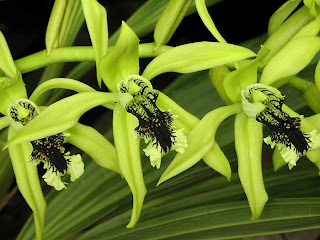 In the life sometimes you can see very extraordinary matters, which you can not explain at all. We only can see it then as one of the many miracles of God.
One of it is the place, where the legendary black orchid is growing.
For lovers of orchids the name black orchid is a very legendary one. Does it really exists, or not?
In 2007 2 people from the district of Kapuas Hulu in West-Borneo (West-Kalimantan) found these very beautifull flowers.
The men;called Uju Suharman and Abeng;founded the flowers growing near the royal graves of the rajas of the very ancient kingdom of Selimbau.
They were stunned by their beauty and talked about it to a youth leader in Selimbau called Mr. Muhamad Walidad.
He to went to the area,where the flowers are growing;an area of ca. 5 ha near the graves of the royal family of Selimbau;besides also growing on nearby lying trees.
Then he went to the government of the district of Kapuas Hulu and also there were talks with the traditional leaders of Selimbau and of course also with the nominal king of Selimbau:Raden Muhammad Asbi Assidiqi. He is the grandson of the last ruling raja of Selimbau:Pangeran Gusti Haji Muhammad Usman, who died in 1925.
Then the chief of the district;the bupati:Bupati Drs. Abang Tambul Husin (a local royal too),
the local king:Raden Muhammad Asbi Assidiqi, local traditional and community leaders came together end 2008 for an important meeting, what important measures there had to be taken to protect this very rare and very beautifull (and very legendary) black orchid;growing near the royal graveyard of the rajas of Selimbau.
It then was declared, that the area would be a special protected area under strict protection from the government. Stealing of the flowers would be punished with very heavy fines per flower.
Of course the area could be visited after permission only and under guidance of the local government.
In the mean time Mr. Muhamad Walidad kept on visiting the area to look after the condition of the legendary flowers.
The area of the royal graveyard of the rajas of Selimbau in Kapuas Hulu district now could become a very important touristic site.
It is hoped, that all will be enjoyed in a very wise way by visitors under the guidance of the local government.
Until now this place is not very well-known,but if the very many orchid lovers of the world knows,that the black orchid really exists and that the royal graveyard of Selimbau is the rare site for it, it could be a very busy visited place in the future.

How a little kingdom like Selimbau could become a famous place in the modern time!

Thanks for sharing this friend, I am also have written similar topic like this on my blog also which is