Siak; a Major Power on Sumatra 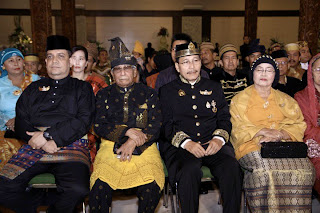 Before the sultanate of Siak was one of the major powers in the East/N-part of Sumatra for a long time. Several small and little principalities were under it's sway. Later these all became independent, but always respected the historical position of the sultan of Siak.
Espacially the sultanate of Aceh was also an important player in the search for control of the area.
The last ruling sultan of Siak;Sultan Abdul Jalil Saifuddin V(rule (1908-)1915-1946); also known as Tengku Syarif Kassim II, ruled in a much turbulent time. In the independence struggle around WW II he was an important defendant of Indonesian independence.
Because of that he was made a national hero of Indonesia in 1998.
He died in 1968 and left no royal heirs. His brother had sons,but not from a royal wife.
So for a long time there was no official dynastychief of Siak.Some years ago that was changed.
The last ruling sultan was descendant of Sultan Abdul Jalil Saifuddin III( T. Sy. Kasim I;ruled 1864-88). This sultan had succeeded his older brother Sultan Abdul Jalil Saifuddin II(Raja Ismail),who ruled from 1827 and had to stop as sultan, because of his health.
Now the line of Sultan Abdul Jalil Saifuddin III/Sy. Kasim is extinct, the dynasty decided to continue with the line of his older brother.
The present chief of the sultan's dynasty of Siak is Haji Tengku Muhammad Muchtar Anum Raja;greatgrandson of the foremost last mentioned sultan, who is also described as Sultan Syarif Ismail Abdul Jalil Syafuddin II.

Siak is one of the important centres of East-Sumatra culture.

Can u show the picture of the present Siak Sultan wearing his royal cloth? Thank you.

I already asked the webmaster to post it,but maybe he is to busy.
You can ask him.
I advise you to go to the facebook of Kanjeng Pangeran Haryo Kusumodiningrat.

refer to the picture, from the 4 person there, which 1 is the current Sultan of Siak?