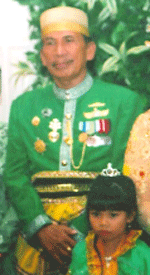 Tallo already consisted in the 15th century and is a branch of a dynasty, which later ruled Gowa and Tallo. Tallo is considerd as a brotherstate of Gowa.
For many times the raja of Tallo was mostly the prime-minister of Gowa as well.
Because the last Raja Karaeng La Makka Daeng Parani was very recalcitrant towards Dutch rule (not only being anti-Dutch), he was deposed 16-4-1856, afetre having ruled for 6 years.Because the dynasty was all the time very non-cooperative, the Dutch east-Indish Government decided to abolish the monarchy in Tallo.
He was allowed after a short while to rule in the vasal-principality of Lipukasi in Tanette, in which he had some rights.
He did that for quite a long time.