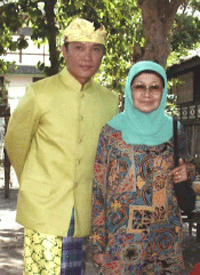 She is one of the most extraordinary persons in the royalty network of Indonesia. As a young woman she was interested and preserved the knowledge of the royal culture of Bima sultanate in a time, when it wasn't really good to concern yourself with it, because Indonesia now was a republic.She was the daughter of the last ruling (and loved) Sultan of Bima.
When the Indonesian government allowed to occupy yourself more with the royal culture and - history, thenshe could come back with all her knowledge, that is why the showing of Bima royal culture is so genuine, because she knows the real culture.
hen her brother died some years ago, his son became dynastychief,but not installed a Sultan, because she thought he also must know more about the royal culture (when it was allowed) to be a good king of Bima according to the customs of Bima.
She was then Regent-Sultana of Bima.The cousin became later even Bupati (Civil Regent) of Bima.
She erally wants to show only eral things in life. She is still all the time seeking in Holland, Indonesia, etc. the documents about the real history and culture of Bima and NTB province. She is very much loved by her own people throughout Indonesia and very much respected by the other monarchs of Indonesia.