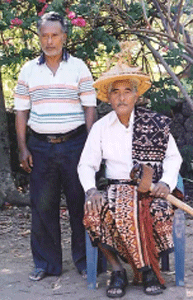 The manek, or Raja of Landu depicted here was the last ruling monarch of Indonesia until he died 18-3-2008. He ruled 1960-1966. Actually his brother was the crownprince, but he was alerady a judge in the big city of Kupang on the nearby island os Timor, so he gave his rights to the dignity to his younger brother. Landu is considered as the oldestso most respected culturally principality of Rote-islands. It is situated on a peninsula, which connection via land is flooded part of the year (ca. half of the year), that is why the landu people are not very much mixed with other peoples. Euroepan people thought befiorem, that the Landu people were actually a mix of Portugese and Melayu people. Sometimes they look very much like Arabs.
The present dynastychief is hisn oldest son and he was before the mayor of the royal town in Landu area; nowadays called Sotimori.

The official raja rule on Rote ceased to exist in 1968,but one way,or another the Raja of Landu could continue to rule until 1974.The crownprince was a high official in the Department of Information of the province,but decided to return totally to Landu ca. 2000.Because being the crownprince and his father already a more than middleaged,he had to;like all crownprinces do at a certain age,or in a certain part of their functioning as crownprince;make the good contact with his people.
So he decided to run for the office of mayor of Sotimori town:the centre area of Landu,in which is also the former raja residence village of Daurendale,which he won.He has his office in the former residence of the Maneks of Landu.A neutral,practical building.
The dynasty hopes to preserve the good things of the tradition;inclusive the princely tradition.The people already see him as the symbol of the continutaion of that.
The last ruling raja,or manek of Landu ruled from 1960-1966,but the raja rule on the Rote islands was abolished in 1968.One way,or another Manek Marthen Matheos Johannis could continue tio rule over Landu until 1974.