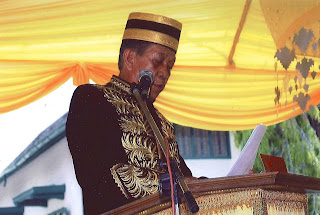 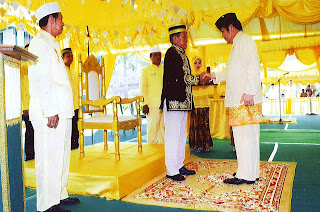 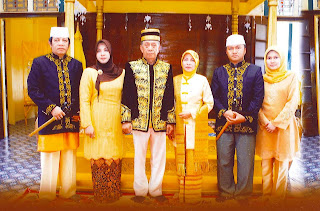 On the 19th of october 2009 Datu Fachruddin;the oldest surviving son of Sultan Mohammad Aminuddin of Sambaliung in East-Kalimantan;was installed as new sultan here.
The 66 year old sultan is one of the 17 children of the last ruling sultan of Sambaliung in the Berau district, who ruled as regent, sultan and later as areachief (of total Berau) from 1902 until his death in 1960.
The 4th son of the late sultan was for a long time the main representative of the dynasty.
Already 6 of his brothers and 9 of his sisters have died.
The last years he was quite busy with a project to make a forefather of him;called Raja Alam;a new National Hero of Indonesia.
This former ruler of Sambaliung between 1830-1834 and founder of a seperate Sambaliung,away from the Berau sultanate, was blamed to find no reason whatsoever to cooperate with Holland on any field and also working together with pirates, who made the area unsafe for international sea transport.
The new sultan is known as a friendly and humble person,who has time for everybody.
He didn't want to rush his installation as a new sultan,although it was clear for years, that he was the best candidate.
Now his patience is rewarded.
He is now, besides the sultan of Kutai Kartanegara;the 2nd sultan, who is installed.
He has taken however not yet the title of sultan, but pemangku adat(chief of the tradition).
Such royals with a similar title are also to be found in some other areas of East-Kalimantan like the nearby Gunung Tabur (the other area in Berau), Bulungan and the a bit more far lying Pasir, but these dignataries are not installed in such an official and elaborate way.
In Banjarmasin we only have a prince, which is chief of the dynastic organisation.

We all hope of course,that also this new king will be a source of identity for the local people.That this installation will really crrate a new feeling of compeleteness for everybody there.

Dont show a picture of this new Sultan?

Luckily my wife talked today weith the new sultan of Sambaliung.He promessed me to send some pictures and a film of his installation.When I have thes material,I shall put it near the article.
Thank you for your interest.