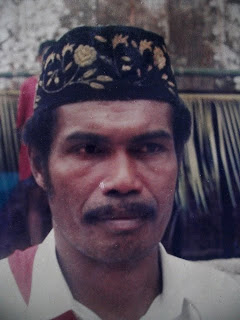 In the SE East of the Bomberay peninsula of Papua lies the Namatota, or Kowiai area. The raja of Namaotota, who lived in the capital Namatota was together with the raja of Rumbati the most important raja of the peninsula.His area was the biggest of all, although not always he had a very direct influence there. Before the stateletts of Arguni and Kaimana were his vasals. The raja of Namaotota could augment his influence with the help of the sultan of Tidore. It was also described as a commercial principality with the economic centre in the capital. The dynasty says, they come from the Gunung Baik area originally. The present raja of Namatota is Raja Hayum Ombaier and like most of the other rajas here also member of the local government. The present raja is meber of the staf of the bupati of Kaimana.
I. Festivana
DP Tick gRMK
Diposting oleh langkat di 08.20

When The popular comment layout is common, so it is easily recognized scanning to post a comment. If the comment section is in a different format, then I am going to spend more time trying to decipher what everything means.

His son Randy Ombaier succeeded him some years ago.You can look his facebook on my facebook Donald Tick