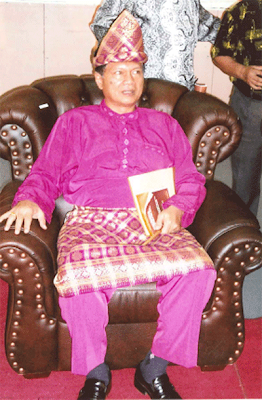 He is the 19th Emperor of the Minangkabau area. This area is ruled by many traditional rulers.
The paramount rulers are 3 of the religion, tradition and the worldly life. This Emperor is the last one and also the main ruler.
The Empire really ceased to exist as existing monarchy in 1833, although some branches were allowed to rule in litle areas nearby.
A branch of the dynasty is also the rulers of Negri Sembilan in malaysia.
A rather important person in the rea tries to explain his opinion about the rights his claim on the Emperor's dignity as well.
Sutan Taufik Thaib is until now actually the most traditionally recognized monarch here. The succesion goes from male monarch to son of his sister.
Hopefully the recently burned palace will be built up.

It is interesting to see,that this monarch is still seen as the paramount monarch of all Minangkabauw people in Sumatra/Indonesia and Negeri Sembilan and Malakka in Malaysia.
When in november 2006 the new Datuk of Naning(one of the original sates of Negeri Sembilan and now lying in Malakka)had to be installed,he had to ask before the approval of the Emperor of Minangkabauw on Sumatra.

Thank you for your comment.Sorry,can niot always see the reactions.

I think the succession isn't necessarily from uncle to nephew, but also from mother to son or daughter. This current Raja Alam, for example, succeeded his mother, Puti Reno Dismah Yang Dipertuan Gadih XVI, who passed away in 2007.

With the recent claimed by Raden Mas Prabhu Gusti Agung Ki Asmoro Wijoyo as the emperor of Indonesia, its means the new era of the monarchy system in Indonesia will emerge as promised by the world.The Heritage funds which belongs to 125 Javanese Kings will be returned to Sounth east Asia in 2012.It is already in the EUro clear system, whether people want to believe or not.It's up to the people to accept the existence of the Emperor, whose name in the US Fed system is KAMAL ASHNAWI as history never lies..that's why there's so manay financial turmoil occur in the western world since everything is movng towards the east......

He succeeded his motherś brother.