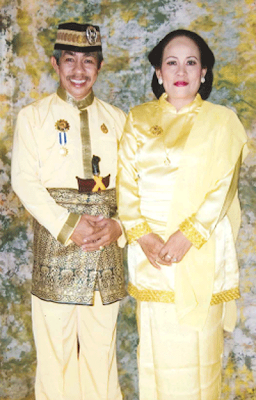 When his father the last Pangeran Ratu (14th monarch) died in 1975 he became chief of the raja family. The principality was founded before 1637 by a son of the very poewrfull Sultan of Banjarmasin in SE Kalimantan and is lying in South middle Kalimantan.

Peculiar eniough the dynasties had not had contact for a considerable time, but one year ago it made the familybond again.
Strange enoug also, that the present monarch is married with a princess of Surakarta in middle-java and the mother of him is a granddaughter of a former Susuhunan of Surakarta.
The present monarch;a friendly and very hardworking royal, plays an important role in the founding of a seperate province of Kotawaringin (the only principality in this area).
People from banjarmasin are known for being very sweet people,this monarch had retianed that character after his dynasty left Banjasrmaisn for nearly 400 years ago.