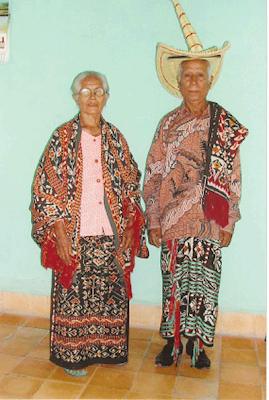 Bokai is one of the 19 principalities on the Rote islands; west from Timor.
This area is the most with principalities populated area of Indonesia.
Bokai was before a rather powerfull principality in middle Rote, but because of to much wanting to make war, the God punished the dynasty by a disaster, The people then split into 2. One part went southwards and were more or less under the rule of the Maneks of Termanu, which were the most powerfull rulers of Rote.
Bokai had later a sort of restriction in his development,that only until a certain amount peopkle could live in the new area and very strange enough,that always remained so.
This Raja really ruled over Bokai from 1961-1966.
He says, he is member of the old dynasty, but when the 2nd dynasty started it is know, they were mardijkers, or free people, which were an elite group of so-called free people (so not under a raja), who became important, because of service in the Dutch army, etc.

This raja is the 40th Raja,or Manek of Bokai.His marriage with Princess Sarah Dethan of the dynasty of nearby lying principality of TalaE was the last royal marriage of a later ruling Raja on Rote with a reasonable big event atmosphere.
Bokai is named after the words for 'It stays"for Bo Kai,which had to do with the wars,which were made in the glorious time of Bokai and had to do with the smell of blood,that stayed.