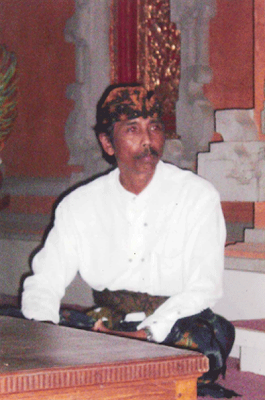 Ida Cokorda Anglurah Tabanan; 27th raja of Tabanan in W-Bali.
Tabanan was before a rather important principality and sometimes called the most powerfull. Hardly any rajas on Bali are now installed with the full installation ceremonies, but this raja is. On 21-3-2008 installed with the abisekha ratu ceremony.
Also very interesting to see,that also quickly after that the king appeared during all kind of occasions as the symbol of redoing the old ceremonies in Tabanan. Actually he is not the oldest son of the last raja of Tabanan, but his older brother died in 2001 and then he was installed as dynastychief.