Dynastychief of Bulungan passed away 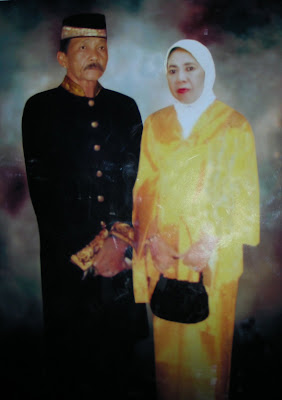 Recently we received the news, that the chief of the N.E.-Kalimantan Sultan's Dynasty of Bulungan died on the 10th of September 2008.
He is His Royal Highness Haji Datu Abubakar; MMdj bin Sultan Maulana Muhammad Djalaluddin; since 1999 Dynastychief of Bulungan.
His father was the 15th king and 9th Sultan of this oilricharea and also the last one, who died in 1958. His older brother Putra Makhota Mohammad Azzimuddin gelar Raja Muda was then the dynastychief of Bulungan until his tragic passing away in 1964.
When in 1999 the Indonesia government indirectly allowed to let be more attention to the Royal- and Princely dynasties of Indonesia, he was chosen as dynastychief of Bulungan.
On many royal occasions in Indonesia he with his Ratu were the faces of the Royal Family of Bulungan.
This kind hearted Royal was born 60 years ago in the royal town of Tanjung Palas; his mother was HRH Aji Bungsu. He began his carreer in the Indonesian Army, where he became sub-officer, then he continued as a government official (typical for Indonesian royals: army, government, education, or business are the most likely future opportunities for a royal). Later he became mayor of the town of Karang Anyar. He was pensioned as such in 2002. Then he dedicated his life to the creating of harmony between the Melayu - and dayak segments of the population of Bulungan; a task very good for him, because he wasn't only the royal face of Bulungan, but also the face of the friendliness in Bulungan.
He had an outspoken opinion about certain subjects, but always mixed that with non-wanting to harm other people.
He was also one of the 5 candidates to become new Sultan of Bulungan and actually he was the future-Sultan of Bulungan alread, but for reasons until now unknown to me his full brother Datu Syukur was chosen on the 15th of februari as future Sultan of Bulungan.

It took so long to select a future-Sultan of Bulungan,because the dynasty wanted full harmony within the dynasy and then select a future-Sultan.
After the royal selection Datu Abubkar Djalaluddin stayed on to be the face of the dynasty at several oocasions.
When he would have been the new Sultan of Bulungan he would have known as Sultan Goodhearted of Bulungan.But God chose another way for him. His brother Datu Syukur is more strong and ambitious in his way of handling the things.
May the memory of Haji Datu Syukur bin Sultan Maulana Muhammad Djalaluddin; who saw the revival of the Royal families in Indonesia and also the borderdispute with Malaysia on the Bulungan border, not be forgotten.
That is what a King must be: a father for his people.
Donald Tick,
Pusat Dokumentasi Kerajaan-kerajaan Indonesia "Pusaka"
Edit by festivi
Diposting oleh langkat di 13.22

my grandfather one of child's sultan bulungan, when tragedy 1964 my grandfather go run in jangle with his 2 brother and his mother queen but now only my grandfather is life and know the true story what happen.we had forget who is us.we had happy with our statue now.

Of course with the last sentence I meant Datu Abubakr and not Datu Syukur.My excuses for that.

I am compiling a research on the exiled Bulungan especially those in Samporna (Sabah).