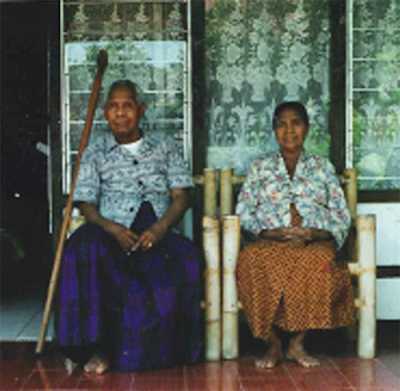 Barnusa is like the Riau-Lingga sultanate in East-Middle Sumatra an interesting principality. The is actually here one paramount Raja of the Baso-dynasty, but in this principality on Pantar island (North of Timor) there is another powerful ruling family, who can be regarded as vice-raja with title of Kapitan. In other areas in this province the title Kapitan mostly refers to districtchief only without mostly any sovereign power, but in Barnusa this is different.
The Blegur ruling family has their own responsibilty in a part of Barnusa and only cooperates strongly with the Baso-raja dynasty.
Kapitan Bastian Blegur is the grandson of last semi-sovereign of the Kalondama area and is given the title of Kapitan of Barnusa. Already for more than 35 years he is the real leader of the people.
The Blegur-family is also quite influential in the government of the district of Alor/Pantar.
Pantar is known as one of the few total unspoiled islands of Indonesia.