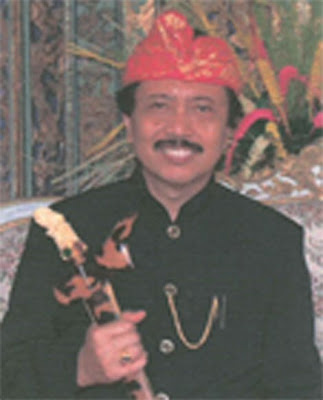 Karangasem was before very powerfull; ruled several other principalities like Buleleng in the north of Bali and nearby lying island of Lombok.
Some kings on Bali are really functioning as king, ohters also like to function as scientific scholars like this raja.
Karangasem was before the biggest friend of Holland, the most friendly principality concerning political- and social developments and the most modern (but with a strong feeling for it's local culture).

His uncle Dr. Anak Agung Made Djelantik was for a time the unofficial chief of the dynasty,but when he found himself to old for that some years, he took up his rightfull position.
Karangasem always was good in taking the good things of the Eastern- and the Western culture.