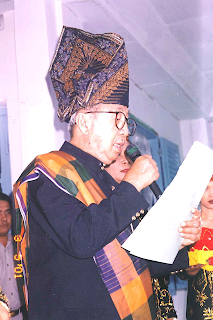 Mori is a quite big principality in East-Sulawesi. The last Mokole, or Raja was his father Mokole Owolu Marunduh. This raja refused to take a position in WW II against the Dutch, because he had discivered before, that the Dutch also had good intentions to develop his principality.
He helped anti-Japanese rebels and so did the people. For his pro-Dutch opinion he was deposed in 1942 and replaced by his son Mokole Besau Marunduh. In 1945 he was restored again.
Being the oldest surviving son of his father he now is the temporary-dynastychief of Mori. But there are plans later to install a younger prince of the dynasty as new Mokole.
The dynasty was and still is a dedicated dynasty to the well-being of it's people. Before they were and still are. They always were known as hardworking people.
So a dynasty examplary for others.
A dynasty, which wanted to serve it's people and not a people,who were servants of it's monarchs.

Because being the oldest surviving son of the last ruling Mokole,or raja of Mori he was chosen to be the temporary dynastychief of Mori.But the dynasty is preparing to install another prince of the dynasty to be the new Mokole of Mori.
Also because the present dynastychief is already a relative old prince.
We are awaiting the development in this extraordinary dynasty with anxiety.