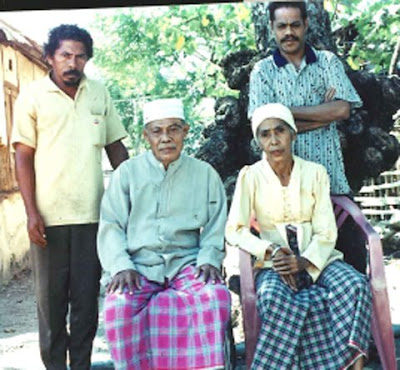 Lamakera also lies on the island of Solor; on the extreme east.
It is the only principality in Indonesia living on the catcing of whales, which swim between this principality and the nearby island of Lembata (Lomblem to the east), where the place of Lamalera is the other place of whalescathing.
Because of the environment polution and other reasons the whalecatching diminished.
The Raja of lamakera and of Lohayong alays were friends of Holland, because this country left these principalities alone instead of Portugal, who tried to push forward to much it's culture and religion.
The capital of Lamakera is built like a birdcolony on a rock.
The principality is little but well organised. In Lamakera there is a strong feeling of history,because they know,that they were important before.
Before he succeeded his brother as raja, this friendly monarch was government official.