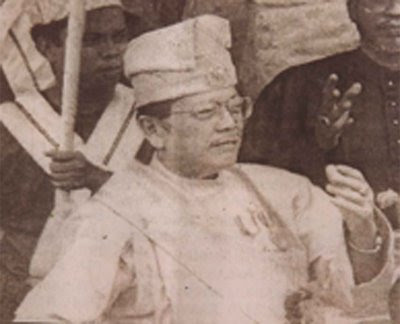 Serdang was founded by the oldest son of a Deli king after a problem in the succesion there. That was in 1723. Sultan Basarsyah II is the 8th king of Serdang.
Very extraordinary, that from the beginning of the rule of his father Sultan Sulaiman Syariful Alamsyah (his complete ruling name) and the present time; the moral/nominal-rule of Sultan Basarsyah II is 129 years. His father began to rule in 1879 as a very young king and ruled for 67 years. Then 2 of his briothers had the title Sultan. Sultan basarsyah is one of the youngest children of his father.
Before he was known as Tengku Luckman Sinar Syah. Before he also was a sort of king, but then the uncrowned king of the history of north- and east-Sumatra.
He wrote many books and articles and gave many readings. He is one of the examplary persons in Indonesia,who preserve and describe the rich Indonesian culture and history, that talent and need was also enherited by some of his children.
He is also the driving force in East-Sumatra (in Indonesia they say North Sumatra) behind the good describing and giving an effective function to the existence of the royal- and princely dynasties there.he speaks several languages, f.i. Dutch (which is neccesarily to read the good descriptions of Indonesian history and culture).
(Many people say: the history of Indonesia lies in the archives of Holland).
Without this king many culture and history would have been lost. And: one of the functions of a king is,that he knows his own history and culture and can describe it. So he is a rather good king then according to that principle.